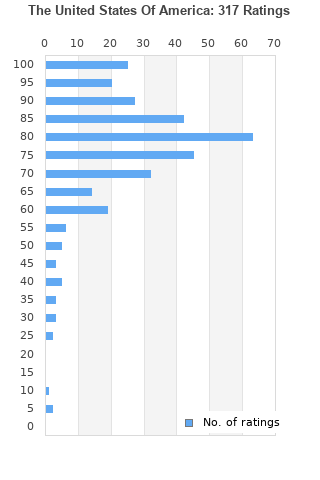 The Presidents of the United States of America,
Condition: Very Good
$5.89

The United States Of America bestography

Listen to The United States Of America on YouTube 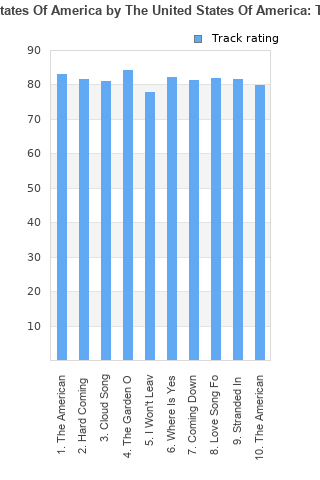 The United States Of America rankings

The United States Of America collection

The United States Of America ratings

Rating metrics: Outliers can be removed when calculating a mean average to dampen the effects of ratings outside the normal distribution. This figure is provided as the trimmed mean. A high standard deviation can be legitimate, but can sometimes indicate 'gaming' is occurring. Consider a simplified example* of an item receiving ratings of 100, 50, & 0. The mean average rating would be 50. However, ratings of 55, 50 & 45 could also result in the same average. The second average might be more trusted because there is more consensus around a particular rating (a lower deviation).
(*In practice, some albums can have several thousand ratings)
This album is rated in the top 4% of all albums on BestEverAlbums.com. This album has a Bayesian average rating of 77.5/100, a mean average of 76.6/100, and a trimmed mean (excluding outliers) of 77.7/100. The standard deviation for this album is 16.7.

The United States Of America favourites

The United States Of America comments

Really cool album. Some amazing electronic sampling and synth stuff but also includes "Love Song for the Dead Che" which is beautiful in its own right without much of the experimentation. Suffers from some studio inadequacies but you can tell how much effort was put into mastering this despite them. Nobody else really doing it like them.

Fantastic psychedelic album which was years ahead of its time when first released. Beautiful dreamy female vocals compliment a plethora of instruments and sound effects. The recording quality on the vinyl re-release which I have just purchased is excellent. Cloud Song could become one of my all time favourite psychedelic tracks. Such a diverse and creative album as this will sit in a very high position in my record collection.

This album is what Jefferson Airplane would sound like if Alice would've gone down the rabbit hole while having a LSD-infused psychosis. The sound of the album is amazing, especially when you realise it was crafted in 1968 and basically the only electronic instrument available at the time was a Moog synthesizer. The opening track begins with a piece of "music" that consists of five different layers, which afterwards merge in a sort of siren, over which singer Dorothy Moskowitz sings a haunting, childish song, that sounds more like a lament. From there on, the album takes you on a trip through all kinds of music, from tunes inspired by dixie land jazz to straight psychedelic tripping sounds to choirs of medieval monks. Strongly recommended for everyone who loves '60s psychedelica.

Key tracks:
- The American Metaphysical Circus
- Hard Coming Love
- The Garden of Earthly Delights
- I Won't Leave My Wooden Wife for You, Sugar
- Where Is Yesterday
- Coming Down

I havent even listened to the album and I'm already excited. These are some glowing reviews!

They put the psych in psychotic rock... In the best way possible...

great music great album very psychedelic and very original at the same time. just a cool gem of a record. consistently solid from start to finish

Woah... this album is crazy.

Beautifully constructed album. As far as the cohesiveness of it as a whole, it may be the best. It's really weird for an album as deep and complex as this one can also have great hooks. Love it!

Your feedback for The United States Of America