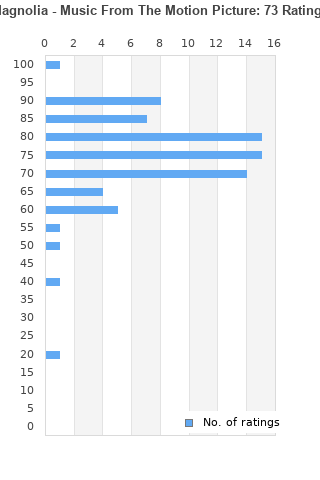 Magnolia is ranked 3rd best out of 14 albums by Aimee Mann on BestEverAlbums.com.

The best album by Aimee Mann is Bachelor No. 2, Or The Last Remains Of The Dodo which is ranked number 2975 in the list of all-time albums with a total rank score of 507. 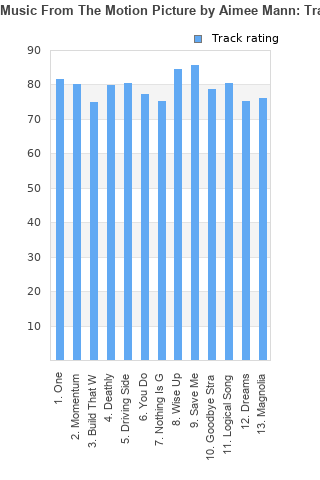 Rating metrics: Outliers can be removed when calculating a mean average to dampen the effects of ratings outside the normal distribution. This figure is provided as the trimmed mean. A high standard deviation can be legitimate, but can sometimes indicate 'gaming' is occurring. Consider a simplified example* of an item receiving ratings of 100, 50, & 0. The mean average rating would be 50. However, ratings of 55, 50 & 45 could also result in the same average. The second average might be more trusted because there is more consensus around a particular rating (a lower deviation).
(*In practice, some albums can have several thousand ratings)
This album is rated in the top 11% of all albums on BestEverAlbums.com. This album has a Bayesian average rating of 75.5/100, a mean average of 75.0/100, and a trimmed mean (excluding outliers) of 75.8/100. The standard deviation for this album is 12.2.

One of the great original pieces of filmmaking matched with the best album of female pop/rock . Movie script by Paul Thomas Anderson was directly influenced by some of the yet to be released songs of his friend Aimee Mann. Most of the Aimee Mann songs were first released on this soundtrack. Pretty amazing to have a soundtrack of mostly original works that could have been released as 5 star album on its own. I love Supertramp and the 2 songs in the soundtrack but ignoring them in evaluating this album. Pretty odd to have all aimee mann works and a couple of older supertramp songs (which were in the movie) tacked in the soundtrack.

Your feedback for Magnolia