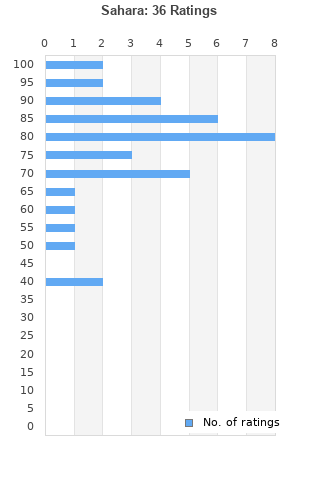 048 limited sale? mccoy tyner-sahara
Condition: Used
Time left: 4h 39m 32s
Ships to: Worldwide
$130.00
Go to store
Product prices and availability are accurate as of the date indicated and are subject to change. Any price and availability information displayed on the linked website at the time of purchase will apply to the purchase of this product.  See full search results on eBay

Sahara is ranked 5th best out of 28 albums by McCoy Tyner on BestEverAlbums.com.

The best album by McCoy Tyner is The Real McCoy which is ranked number 4360 in the list of all-time albums with a total rank score of 313. 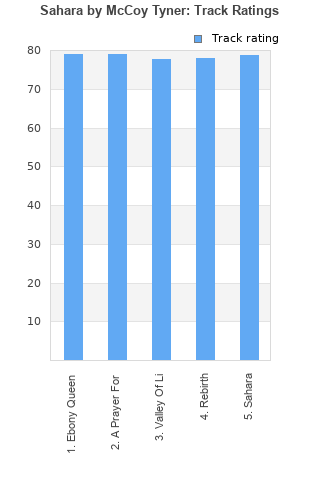 Rating metrics: Outliers can be removed when calculating a mean average to dampen the effects of ratings outside the normal distribution. This figure is provided as the trimmed mean. A high standard deviation can be legitimate, but can sometimes indicate 'gaming' is occurring. Consider a simplified example* of an item receiving ratings of 100, 50, & 0. The mean average rating would be 50. However, ratings of 55, 50 & 45 could also result in the same average. The second average might be more trusted because there is more consensus around a particular rating (a lower deviation).
(*In practice, some albums can have several thousand ratings)
This album is rated in the top 2% of all albums on BestEverAlbums.com. This album has a Bayesian average rating of 80.2/100, a mean average of 81.2/100, and a trimmed mean (excluding outliers) of 82.7/100. The standard deviation for this album is 11.3.

This is a pretty darn cool album! Side one has its ups and downs, though I particularly like the solo piano venture A Prayer for My Family. Its astoundingly complex and equally gorgeous. However the real highlight is the 23 minute behemoth that closes it off. Oftentimes free jazz can be an excuse for not really having any ideas at all, but this piece seems to have a strength and purpose to it I haven't encountered in very many other circumstances. In fact, the whole album has some sort of very unique energy to it that seems to be just barely contained by the recording

Your feedback for Sahara