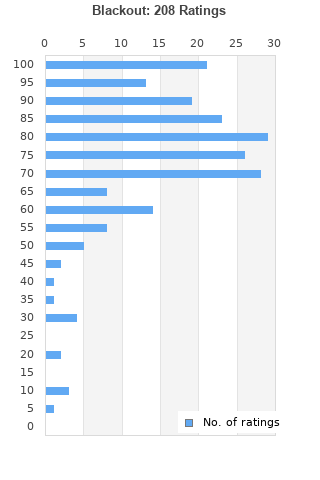 Blackout is ranked as the best album by Scorpions. 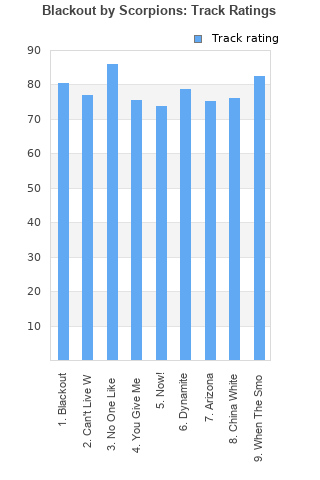 Rating metrics: Outliers can be removed when calculating a mean average to dampen the effects of ratings outside the normal distribution. This figure is provided as the trimmed mean. A high standard deviation can be legitimate, but can sometimes indicate 'gaming' is occurring. Consider a simplified example* of an item receiving ratings of 100, 50, & 0. The mean average rating would be 50. However, ratings of 55, 50 & 45 could also result in the same average. The second average might be more trusted because there is more consensus around a particular rating (a lower deviation).
(*In practice, some albums can have several thousand ratings)
This album is rated in the top 5% of all albums on BestEverAlbums.com. This album has a Bayesian average rating of 76.9/100, a mean average of 75.4/100, and a trimmed mean (excluding outliers) of 77.1/100. The standard deviation for this album is 18.4.

Favoritas: No One Like You, Blackout, When The Smoke Is Going Down

The Scorpions are just so cheesy, like most hair metal acts.

ouh! it's the scorpions. the best-selling music artist from germany of all time. loved and hated. the music on this record is somehow what i would like to call summertime-cabrio-metal. The songs convey an unproblematic state of mind - everything that's importend are the songs and the task of the songs is to amuse the audience. These kitschy shallowness is on the one hand, what makes this record a solid hardrock-album - on the other (imo) hand it's the reason, why this band is hated by so many people.

Love this album. Favorites are Blackout, No One Like You, You Give Me All I Need, Now, and Dynamite.

Attention all 80s Metal fans.....GET this album and turn it up loud!

Your feedback for Blackout