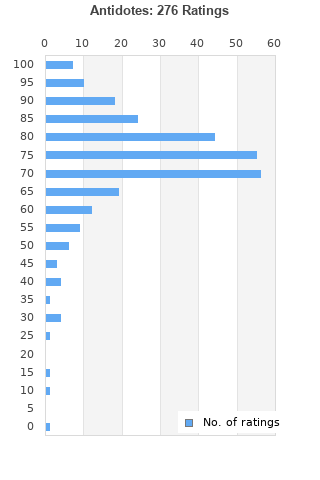 Antidotes is ranked 2nd best out of 7 albums by Foals on BestEverAlbums.com.

The best album by Foals is Total Life Forever which is ranked number 1301 in the list of all-time albums with a total rank score of 1,362. 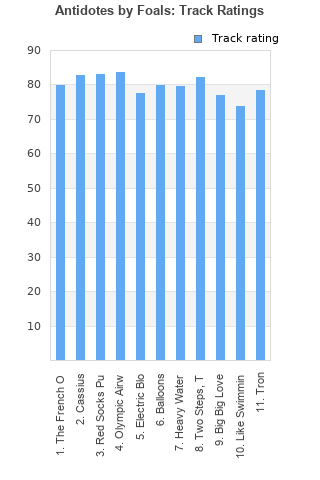 Rating metrics: Outliers can be removed when calculating a mean average to dampen the effects of ratings outside the normal distribution. This figure is provided as the trimmed mean. A high standard deviation can be legitimate, but can sometimes indicate 'gaming' is occurring. Consider a simplified example* of an item receiving ratings of 100, 50, & 0. The mean average rating would be 50. However, ratings of 55, 50 & 45 could also result in the same average. The second average might be more trusted because there is more consensus around a particular rating (a lower deviation).
(*In practice, some albums can have several thousand ratings)
This album has a Bayesian average rating of 73.9/100, a mean average of 73.0/100, and a trimmed mean (excluding outliers) of 73.9/100. The standard deviation for this album is 15.0.

Brilliant album. Only their 5th best in my opinion which shows how great they are! Very different in sound to all of their other work, but a more-than-worthy part of their excellent discography so far. My highlights are Heavy Water, Tron, Balloons and Olympic Airways. Big Big Love and Like Swimming are the weakest tracks.

Infectious, immediate and relentless math rock greatness. Foals' debut is just filled with this unrestrained momentum bursting through every song. I may be biased because I've listened to it so much, but there isn't a skippable track on this album. Quite possibly my favorite math rock record ever.

The instrumentation (especially the guitars) do a great job of creating an atmosphere, but I can't find any appeal in these vocals. Also, "Like Swimming" is just the intro to Sweet Jane by TVU

Their best album, even though, as Total Life Forever, suffers the last tracks, 10 tracks would have been enough. I like the fast tunes, especially in Cassius and Balloons, and Olimpic Airways is anyways a good track even if different form the rest of the album.

Great Debut, close to the best album of 2008 in my opinion

Love this album, but it's significantly improved with the bonus disc of early singles and live stuff. Can imagine this one being a big influence in the years to come.

Your feedback for Antidotes