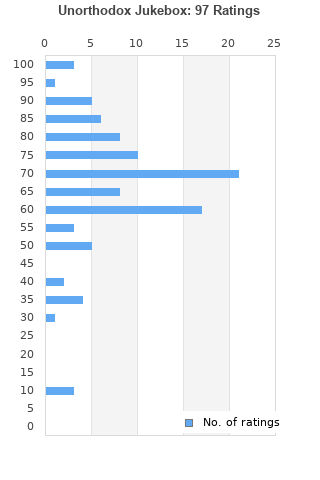 Unorthodox Jukebox is ranked 2nd best out of 4 albums by Bruno Mars on BestEverAlbums.com.

The best album by Bruno Mars is Doo-Wops And Hooligans which is ranked number 3172 in the list of all-time albums with a total rank score of 472. 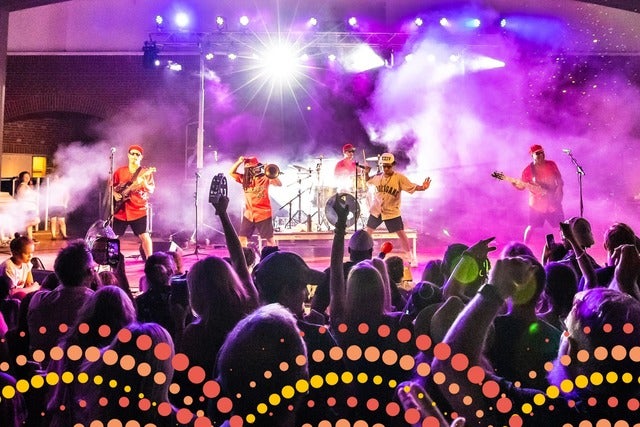 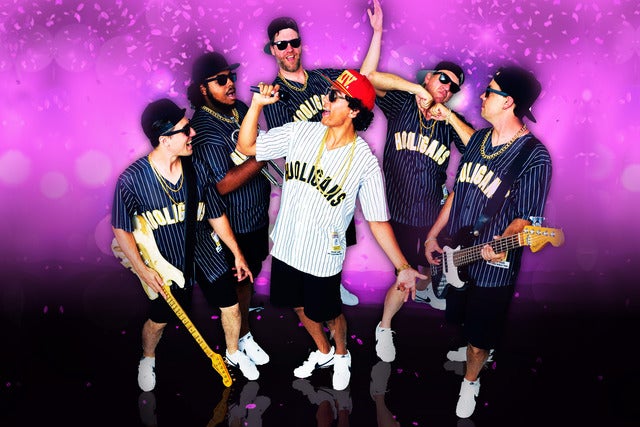 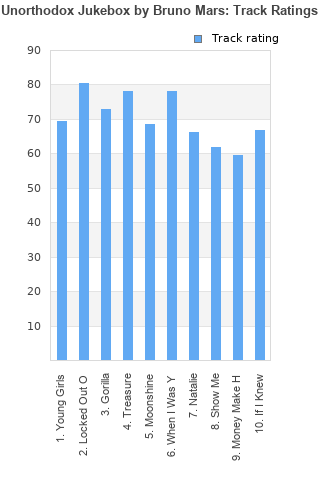 Rating metrics: Outliers can be removed when calculating a mean average to dampen the effects of ratings outside the normal distribution. This figure is provided as the trimmed mean. A high standard deviation can be legitimate, but can sometimes indicate 'gaming' is occurring. Consider a simplified example* of an item receiving ratings of 100, 50, & 0. The mean average rating would be 50. However, ratings of 55, 50 & 45 could also result in the same average. The second average might be more trusted because there is more consensus around a particular rating (a lower deviation).
(*In practice, some albums can have several thousand ratings)
This album has a Bayesian average rating of 69.2/100, a mean average of 66.8/100, and a trimmed mean (excluding outliers) of 68.8/100. The standard deviation for this album is 17.9.

This album is all over the place and I get that's kind of the theme and to showcase Mars' range across different styles of pop songs but it makes for an uneasy listening experience. Definitely an improvement over his first album.

Other commenters have mentioned many of the highlights of this album - but I have to note that the song "Natalie" has been overlooked. A terrific performance by Mars, a stirring plea for a lady. It is infectious like most of the other content here. Thumbs Up!

A really underrated pop album, all the songs are pretty good, except by 'Show Me', this one is just ok. It's his best work until now.

Bruno Mars is not your typical pop star.

Not a lot has changed on Bruno's second album - stand-out singles, unnecessarily overdubbed filler, and another embarrassing attempt at reggae. This album truly deserves a worse rating than Doo-Wops because it repeats many of the same mistakes. However, his style is better defined and I no doubt appreciate his attempts at soul and funk. Also, "Locked Out of Heaven" - feel-good radio hit of 2012.

Bruno Mars is hard to hate. This is a entertaining album... that's it.

Good ol’ Bruno Mars. The man has an amazing voice and is all over the world of pop and hip-hop music. You can always tell a song is going to be popular if it features Bruno Mars or if it is co-written by him. The popular music community just seems to love this guy and you know what? I love him too. To an extent. “Unorthodox Jukebox" is the same thing as his last album “Doo-Wops And Hooligans", great melodies, stupid lyrics. Mars is unbelievably gifted as a melodist, he can write a catchy melody like no one else but holy crap can his lyrics get stupid (take a look at “Gorilla"). You’re going to like this album if you love the catchy melodies, though I would say that there aren’t as many good songs on this album as the last, but you have to get past the banal lyrics. If you can do that, you’ll enjoy this album as I did.

Really solid record. I just have a high regard for Bruno. He's a solid singer, musician , and songwriter. There are some really good funky parts here (Treasure) and some great old school soul songs (If I Knew) and a huge amount of MJ sounding parts. But the record covers other ground, like "Locked Out of Heaven" is just this overwhelmingly infectious pop song which I thought was a Police track for the first 20 seconds I heard it. That's a stand out in my opinion. "When I Was Your Man" is very nostalgic of early solo MJ like the slow ballad off "Off The Wall " (forgot the name) anyway, I liked this record a lot. Recommended.

Not a bad album at all bruno mars has improved greatly

Your feedback for Unorthodox Jukebox