A Question Of Balance (studio album) by The Moody Blues 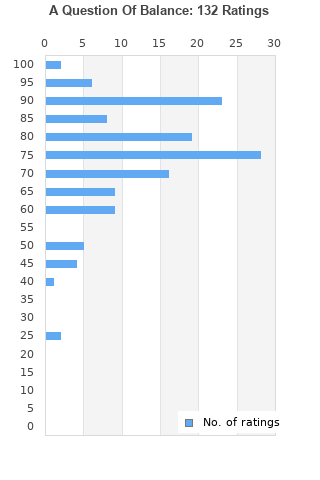 A Question Of Balance is ranked 9th best out of 26 albums by The Moody Blues on BestEverAlbums.com.

The best album by The Moody Blues is Days Of Future Passed which is ranked number 351 in the list of all-time albums with a total rank score of 5,439. 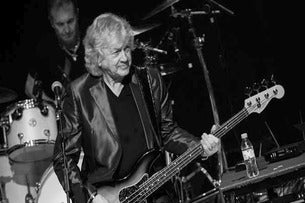 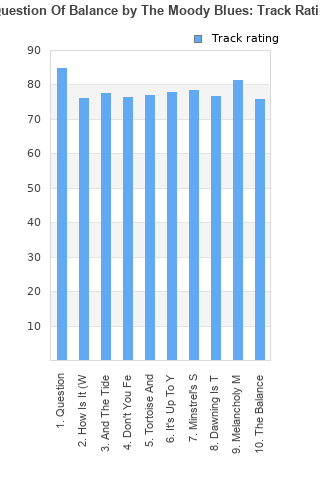 A Question Of Balance rankings

A Question Of Balance collection

A Question Of Balance ratings

Rating metrics: Outliers can be removed when calculating a mean average to dampen the effects of ratings outside the normal distribution. This figure is provided as the trimmed mean. A high standard deviation can be legitimate, but can sometimes indicate 'gaming' is occurring. Consider a simplified example* of an item receiving ratings of 100, 50, & 0. The mean average rating would be 50. However, ratings of 55, 50 & 45 could also result in the same average. The second average might be more trusted because there is more consensus around a particular rating (a lower deviation).
(*In practice, some albums can have several thousand ratings)
This album is rated in the top 8% of all albums on BestEverAlbums.com. This album has a Bayesian average rating of 75.8/100, a mean average of 75.2/100, and a trimmed mean (excluding outliers) of 76.0/100. The standard deviation for this album is 14.3.

A Question Of Balance favourites

A Question Of Balance comments

This is an album where the group seemed to try to swap their amazing progressive and intricate style for more simple and accessible songs and it doesn't work for me. Bare a few tracks, most of the songs on here are quite dull and don't really give you much to explore. This is disappointing as most of their other records have such a rich sound that feels so grand as you listen too it. They seem to have lost that on this record. There are still fun tracks on here and it is very easy listening so I can see why people enjoy it. Overall, while it is great in places there just isn't enough in this record for me.

So I think this was their attempt to strip down a little and be more rock(partly so that it would be easier to tour the album). But I think it's as good as their albums before it. "It's Up to You" is a fave of mine, kinda country/southern rock and "The Balance" is a great finisher that really gives the feel of a troubled person, finally realizing an important truth.

Typically outstanding album from the classic seven. Chock full of great tunes and creative expression. Of the original batch, this one has the best of all the spoken poetry in "The Balance."

Lets just all agree that this is one of the most interesting album covers of all time. My dad has had it on a poster on his wall my whole life

Good but my least favourite of the "Classic 7". It is too conservative and bland for me to consider it really good progrock or symphony rock. Best tracks are "Question" and "And the Tide Rushes In".

Your feedback for A Question Of Balance