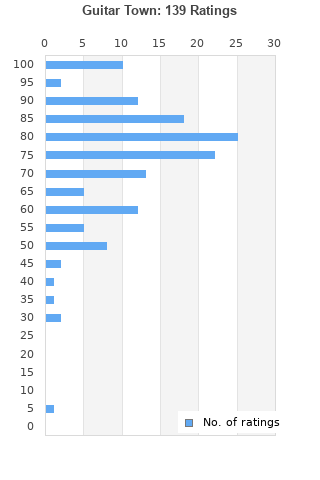 Guitar Town is ranked as the best album by Steve Earle. 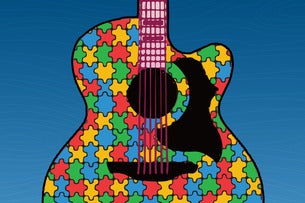 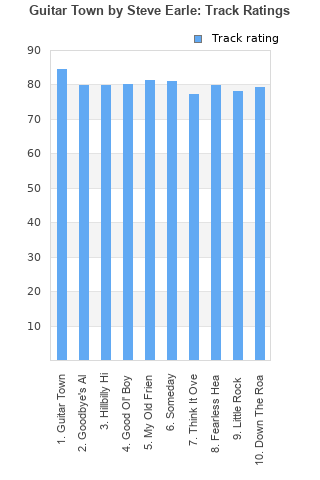 Rating metrics: Outliers can be removed when calculating a mean average to dampen the effects of ratings outside the normal distribution. This figure is provided as the trimmed mean. A high standard deviation can be legitimate, but can sometimes indicate 'gaming' is occurring. Consider a simplified example* of an item receiving ratings of 100, 50, & 0. The mean average rating would be 50. However, ratings of 55, 50 & 45 could also result in the same average. The second average might be more trusted because there is more consensus around a particular rating (a lower deviation).
(*In practice, some albums can have several thousand ratings)
This album is rated in the top 16% of all albums on BestEverAlbums.com. This album has a Bayesian average rating of 75.0/100, a mean average of 74.6/100, and a trimmed mean (excluding outliers) of 75.1/100. The standard deviation for this album is 16.3.

Great album, I do like most of the tracks, my favorite Down the road.

Great songwriting, but the music is somewhat anonymous. I agree that the production takes away from it - this would be better live.

bobbyb: When I was real young I bought Guitar Town from one of those record clubs they used to have where you get albums in the mail. At the time I probably didn't think of it as country music, but I loved it. Of course now I can see that it's country, but I think at the time I just thought it was southern rock or something. Heh heh

Repo:
lol. I used to so the same thing. Columbia House. It's what got my addiction started. I blame them for everything. 12 albums for a penny. What kid couldn't refuse. Total dealers.

Yeah. This Steve Earle album is very much just 80s Heartland ROCK not that different from what John cougar and even Springsteen were doing at the time. It's definitely country with a major debt to Johnny Cash but it fits in nicely with AOR/MOR 80s rock for the most part. Just great songs and not a bit of filler. True 80s rock classic.

The one drawback on this album is the MOR 80s rock production with robs it of its power, but if you can track down the 30th Anniversary release (which is available on Spotify), he plays the entire album live in Chicago in 1987 without any of that production gloss. Totally worth hunting down!!!

My intro to Steve Earle and I still think it's his best - Someday is a stand out track.

Steve Earle's best record. He must have been really trying hard to make it in the music business because the production suffers a bit, sometimes it works but often it can sound dated. The songs are solid though. Recommended.

Steve Earle is definitely the Hank Williams of our generation-except thankfully he's lived to tell the tale.

Maybe if this was made 30 years earlier, it would've been impressive.... but it's fairly bland country-pop. Really cheesy lyrics over some well played guitar and 2 note basslines...I'm sorry, I don't find this better than any Taylor Swift album (not that she's any good either).

Relistened to this album, and yeah, this is Steve Earle at his greatest. Not a single weak track and songwriting right up there with Kris Kristofferson and Guy Clark. A classic.

Your feedback for Guitar Town