Alopecia (album) by Why? 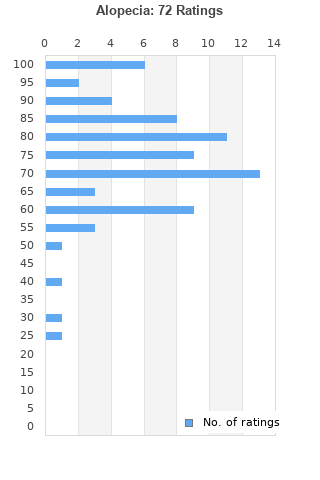 Alopecia is ranked as the best album by Why?. 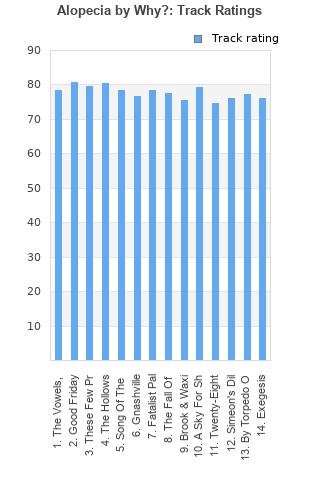 Outliers can be removed when calculating a mean average to dampen the effects of ratings outside the normal distribution. This figure is provided as the trimmed mean. A high standard deviation can be legitimate, but can sometimes indicate 'gaming' is occurring. Consider a simplified example* of an item receiving ratings of 100, 50, & 0. The mean average rating would be 50. However, ratings of 55, 50 & 45 could also result in the same average. The second average might be more trusted because there is more consensus around a particular rating (a lower deviation).
(*In practice, some albums can have several thousand ratings)
This album is rated in the top 14% of albums on BestEverAlbums.com. This album has a mean average rating of 75.0/100. The trimmed mean (excluding outliers) is 75.4/100. The standard deviation for this album is 16.0.

Thoroughly enjoyable. I had never heard of these guys before so this came as a complete surprise to me, if you're in the same boat, I hope you enjoy this as much as I did. Fantastic release.

I give it two thumbs up!

I waited until my Secret Santa recipient could enjoy this before I added it to my chart and I thoroughly missed it. This album is the best album I've heard from the indie underground.

why? is one of those freaky artists that is pretty unclassifiable, i guess mostly part indie pop, part hip-hop. "Alopecia", the falling apart of a man (by the folicle), starts off "i'm not a ladies man, i'm a land-mine" in "the vowels, part 2", and so starts the falling apart of the narrator ending in the deceptively catchy "cheery A, cheery E, cheery I, cheeriO, cheery U". . It's like he's writing and reading anything and everything into his journal "reading Puerto Rican porno" and "blowing kisses to disinterested bitches" on "Good Friday" with another deceptively catchy lyrical hook (which is common on "Alopecia"). There's a lot of death and dead-or-alive rotting from "the smell of our still human bodies gas" on "These Few Presidents" (with the poetically universal sentiment "even though i haven't seen you in years, yours is a funeral i'd fly to from anywhere") to the opening stanza on "the hollows" (possible best track) to "song of the sad assassin" which begins "we lifted the body from the water like a gown" and ends "billy the kid did what he did and he died". There's a complicated bluntness of the human condition and mortality that you'll miss if you're too busy humming along.

I highly recommend this if you're into TV on the radio, beastie boys, and of course artists like cloudDEAD and 13&God. This is the album where Why? transitioned from hip-hop to more "indie pop" and more conventional song structures.

Your feedback for Alopecia