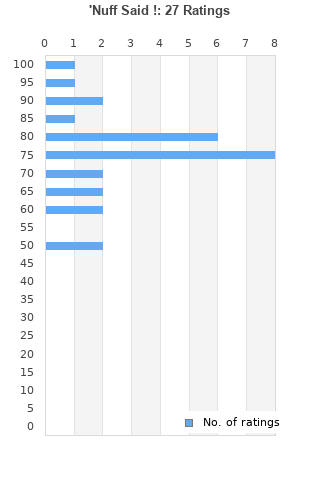 'Nuff Said ! is ranked 12th best out of 45 albums by Nina Simone on BestEverAlbums.com. 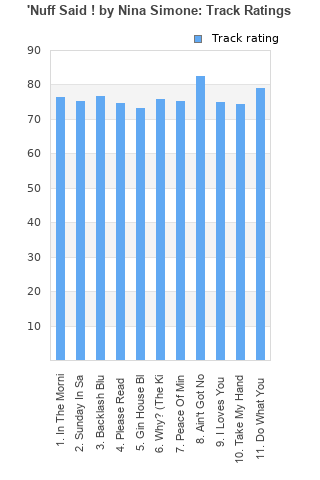 Rating metrics: Outliers can be removed when calculating a mean average to dampen the effects of ratings outside the normal distribution. This figure is provided as the trimmed mean. A high standard deviation can be legitimate, but can sometimes indicate 'gaming' is occurring. Consider a simplified example* of an item receiving ratings of 100, 50, & 0. The mean average rating would be 50. However, ratings of 55, 50 & 45 could also result in the same average. The second average might be more trusted because there is more consensus around a particular rating (a lower deviation).
(*In practice, some albums can have several thousand ratings)
This album is rated in the top 6% of all albums on BestEverAlbums.com. This album has a Bayesian average rating of 76.4/100, a mean average of 77.8/100, and a trimmed mean (excluding outliers) of 77.8/100. The standard deviation for this album is 11.4.

Drunken days, dancing alone. Even that can be treasured as a nice memory

A soulful live record from one of the all time great female vocalist, performed days after the death of MLK with a necessary vital passion.

Nuff Said is mostly a live record except for the studio recording of "Do What You Gotta Do ". The live part was recorded in April 68 not long after the murder of Martin Luther King as mentioned by Nina in the song "The King Of Love Is Dead" a moving song, overall a good record but not her best

Your feedback for 'Nuff Said !