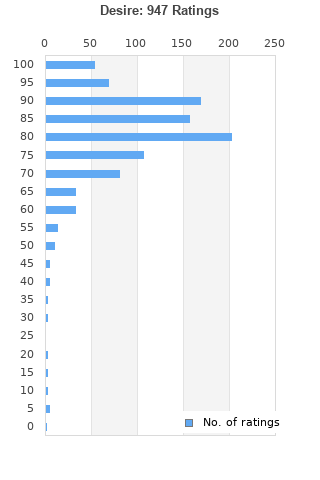 Desire is ranked 6th best out of 72 albums by Bob Dylan on BestEverAlbums.com.

The best album by Bob Dylan is Highway 61 Revisited which is ranked number 24 in the list of all-time albums with a total rank score of 38,764. 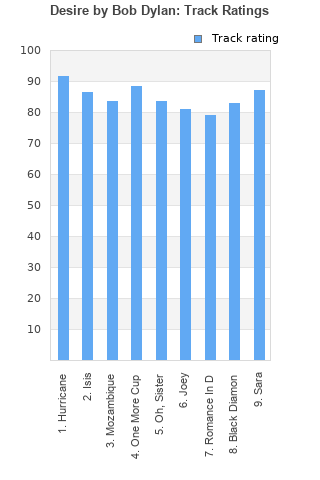 Rating metrics: Outliers can be removed when calculating a mean average to dampen the effects of ratings outside the normal distribution. This figure is provided as the trimmed mean. A high standard deviation can be legitimate, but can sometimes indicate 'gaming' is occurring. Consider a simplified example* of an item receiving ratings of 100, 50, & 0. The mean average rating would be 50. However, ratings of 55, 50 & 45 could also result in the same average. The second average might be more trusted because there is more consensus around a particular rating (a lower deviation).
(*In practice, some albums can have several thousand ratings)
This album is rated in the top 1% of all albums on BestEverAlbums.com. This album has a Bayesian average rating of 81.5/100, a mean average of 80.5/100, and a trimmed mean (excluding outliers) of 81.6/100. The standard deviation for this album is 13.5.

The most underrated album of his catalogue, it stands as one of Dylan's most unique and captivating works. It hits a couple lows (Joey and Mozambique), but the highs more than make up for them.

The album itself is pretty good, but Hurricane is hands-down one of the top 20 songs of all time.

It's a great testament to Dylan's fantastic catalogue of work that 'Desire' ends up as a very underrated body of work, completely new direction of sound of a more mature, well travelled man!

Put that bloody violin away!

Dylan is so good at retooling his whole sound and presentation from album to album without sacrificing any quality. Desire is a masterpiece that captures a mood like nothing else that came before it or has come since.

Bob Dylan's greatest achievement. I haven't listened to any Dylan album as much as this one.

I suppose it is technically a good album. The songwriting is intelligent and he constructs some thought-worthy ballads. However, to me the LP is the perfect example of how Dylan had lost the flair and easy-flow that made me and many other adore and revere his early work.

A big thumbs up for this album, possible one of his best. The weakest song is ROMANCE IN DURANGO, and the rest are really good.

Fantastic, and the most underrated Dylan album. Latino music influences, female backing vocals (she reminds me of that woman who played violin and sang on Jack White's Lazaretto, fantastic voice), violin and almost gypsy music rhythms. The most adventurous Dylan has ever been. Has what is probably my favourite Dylan song ever, Hurricane. Joey is tour de force of a song, but i really think it should've been much shorter. 5 choruses...

Your feedback for Desire