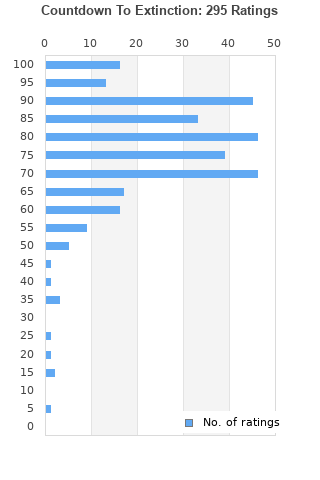 Countdown to Extinction by Megadeth (Cassette, Jul-1992, Capitol/EMI Records)
Condition: Like New
Time left: 2h 39m 31s
Ships to: Worldwide
$9.00
Go to store
Product prices and availability are accurate as of the date indicated and are subject to change. Any price and availability information displayed on the linked website at the time of purchase will apply to the purchase of this product.  See full search results on eBay

Countdown To Extinction is ranked 3rd best out of 23 albums by Megadeth on BestEverAlbums.com.

The best album by Megadeth is Rust In Peace which is ranked number 422 in the list of all-time albums with a total rank score of 4,622. 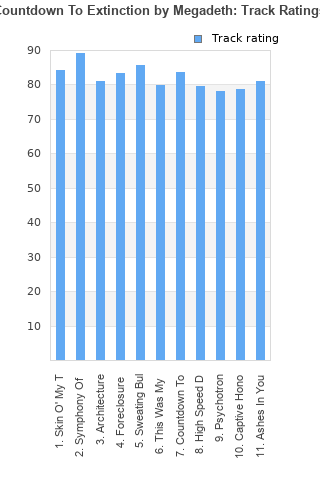 Rating metrics: Outliers can be removed when calculating a mean average to dampen the effects of ratings outside the normal distribution. This figure is provided as the trimmed mean. A high standard deviation can be legitimate, but can sometimes indicate 'gaming' is occurring. Consider a simplified example* of an item receiving ratings of 100, 50, & 0. The mean average rating would be 50. However, ratings of 55, 50 & 45 could also result in the same average. The second average might be more trusted because there is more consensus around a particular rating (a lower deviation).
(*In practice, some albums can have several thousand ratings)
This album is rated in the top 4% of all albums on BestEverAlbums.com. This album has a Bayesian average rating of 77.7/100, a mean average of 76.8/100, and a trimmed mean (excluding outliers) of 77.9/100. The standard deviation for this album is 15.6.

Decent album but nothing that sets it apart or makes it superior to any of their other albums. It's pretty much paint by numbers Megadeth. 'Skin O' My Teeth', 'Symphony of Destruction' & 'High Speed Dirt' my picks of the bunch.

Really solid album without a single weak song. It succeeds in being more accessible than their other albums even for guys who are not huge fans of this kind of music without compromising in terms of musicianship.

This was the album that got me into music. I found an old scrathed cd of it in the garage one day. For some reason I decided to put it in a cd player even though I was never really in to listening to music... Then the whole album electrified me. Megadeth really nailed this one. They took a more commercial sound which caused this one to be their biggest success. I love every track on this one, and ALWAYS sing along to sweating bullets when I hear it. Such a good piece.

Megadeth follow Metallica's lead in making an an album of shorter, punchier songs. Countdown to extinction, is similar to the Black album in lots of ways. Some good tracks here, though nothing spectacular, but it's good to hear a focused and coherent record. Skin 'o my teeth, sweating bullets, and the title track are all fine. Possibly Megadeth's most enjoyable record, though certainly not their best.

Their first and probably only album where everything just locked into its place. If Puppets was a Political Science 101 course, then after Countdown you've got all the credits in for a Master's Degree in Social Sciences.

I feel there's no great art without bitterness, and few artists have been as bitter as Mustaine. Often his words are as venomous as they are true. Masses don't appreciate folks who speak their mind. I've never much cared for people who never say anything about anything that matters. Makes me wonder if they can think at all.

Every thinking (wo)man is bound to err once in a while. Thinking and speaking one's mind freely is like playing with fire: it doesn't "only" cost friendships and careers, it costs lives too.

Just what happened to Dave after CTE, is anyone's guess.

To me the man was never as intellectually sober and honest as when he wrote CTE. Not much of a live band - at least from what I've personally experienced. Have a huge respect for the man when it comes to musicianship, though.

This guy could operate with ease in any music field if he wanted to. Hugely talented person and probably one of the fastest thinking guys in rock music history. It really is a huge mind fuck that some of the smartest people around us are so frequently also some of the most retarded ones simultaneously.

If jebus is your preferable choice of drugs then so be it. Just keep it to yourself, bro. And another worthwhile tip would be to start getting daily news from more media outlets than just Alex Jones...

That goes for all of ya.

Your feedback for Countdown To Extinction