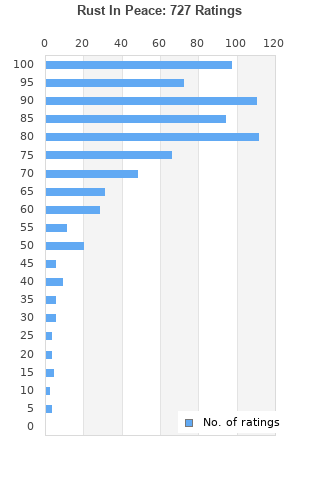 Rust In Peace is ranked as the best album by Megadeth. 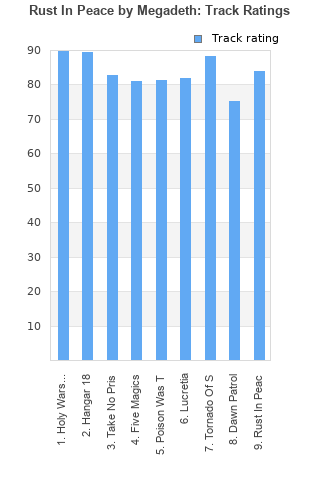 Rating metrics: Outliers can be removed when calculating a mean average to dampen the effects of ratings outside the normal distribution. This figure is provided as the trimmed mean. A high standard deviation can be legitimate, but can sometimes indicate 'gaming' is occurring. Consider a simplified example* of an item receiving ratings of 100, 50, & 0. The mean average rating would be 50. However, ratings of 55, 50 & 45 could also result in the same average. The second average might be more trusted because there is more consensus around a particular rating (a lower deviation).
(*In practice, some albums can have several thousand ratings)
This album is rated in the top 1% of all albums on BestEverAlbums.com. This album has a Bayesian average rating of 81.0/100, a mean average of 79.7/100, and a trimmed mean (excluding outliers) of 81.1/100. The standard deviation for this album is 17.7.

There’s more musical diversity here than I thought at first. Style wise, it’s not my bag, and I really don’t like the singer’s voice but some of the grooves get me going, so to speak.

Frankly the only album from Megadeth that deserves to be really well considerated; other stuff... not bad, but nothing expecial.

Maybe in top 10 of best Metal album ever

The opening of this album, namely the first two songs plus Tornado of Souls, is legendary, but I appreciated "Peace Sells" more due to its consistency.

BY FAR the best megadeth album!

Easily Megadeth's best album. Great from start to finish (maybe with the exception of 'Five Magics'). A solid staple in the classic trash metal cannon.

A prime example of thrash metal. The debut for the classic Megadeth lineup.

My favorite thrash album of all time. Definitely in the conversation for best ever metal album.

Your feedback for Rust In Peace