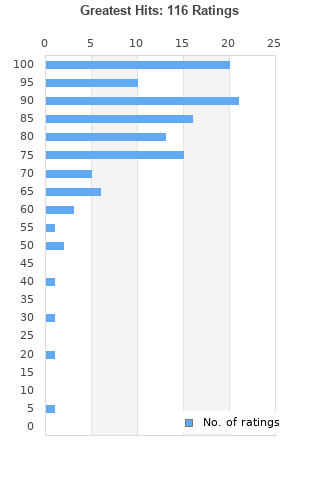 Greatest Hits is ranked 32nd best out of 83 albums by Neil Young on BestEverAlbums.com.

The best album by Neil Young is After The Gold Rush which is ranked number 78 in the list of all-time albums with a total rank score of 18,273. 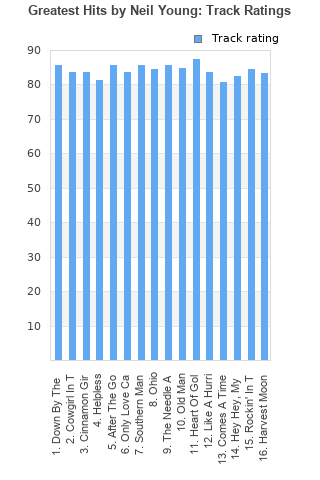 After The Gold Rush
Rating: 85 (23 votes)Comments:

Rating metrics: Outliers can be removed when calculating a mean average to dampen the effects of ratings outside the normal distribution. This figure is provided as the trimmed mean. A high standard deviation can be legitimate, but can sometimes indicate 'gaming' is occurring. Consider a simplified example* of an item receiving ratings of 100, 50, & 0. The mean average rating would be 50. However, ratings of 55, 50 & 45 could also result in the same average. The second average might be more trusted because there is more consensus around a particular rating (a lower deviation).
(*In practice, some albums can have several thousand ratings)
This album is rated in the top 1% of all albums on BestEverAlbums.com. This album has a Bayesian average rating of 83.1/100, a mean average of 82.3/100, and a trimmed mean (excluding outliers) of 84.0/100. The standard deviation for this album is 16.5.

Great introduction to Neil Young. Every song is fantastic and of course, familiar. I have known for a long,time that this music is brilliant. I just did not know where to start. Hey, hey, my, my now I need to go back and listen to the albums.

About what you'd expect for a one CD release. A decent review, no real shocking omissions, just a competent compilation.

This release should have been a box set.

There will be different opinions, when the selection of tracks for a best of album with an artist with a long career has to be decided for. This especially must be the case with an artist like Neil Young, partly because his career has been long but also a musician who has changed his musical expression several times during this career. Above this, when only one CD is available, it seems a thankless task to select tracks with a total playing time, which may not exceed 80 minutes.

Broadly speaking, I think that this "Greatest Hits" is an excellent bid to provide an overview of Neil Young's career from 1969-91. Naturally there is a particular focus on the early years, when Young was undoubtedly at his most productive and innovative.

I do think, though, that it is a shame to choose two very long tracks from "Everybody Knows This Is Nowhere." Both "Down By the River" and "Cowgirl In The Sand" are fine tracks, but are they suitable for a best of compilation? - they do take space for other relevant songs.

I especially miss '"See The Sky About two Rain" from "On the Beach", a strong album that is not even represented; the explanation for this must have something to do with rights.

"Do not Let It Bring You Down" and "I Believe in You" from "After the Gold Rush" would also have been an obvious choices.

I wonder also why "Out in the weekend" and the title track from "Harvest" are omitted.

Anyhow, most Young fans think that all of his 1970s records are albums to have in their whole; and this CD is only to be considered as an appetizer for more.