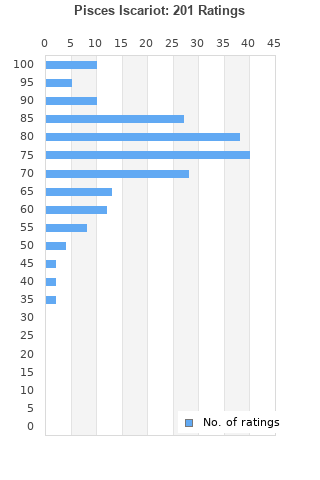 SMASHING PUMPKINS / pisces iscariot /JAPAN LTD CD OBI
Condition: Good
Time left: 2d 11h 59m 33s
Ships to: Worldwide
$24.99
Go to store
Product prices and availability are accurate as of the date indicated and are subject to change. Any price and availability information displayed on the linked website at the time of purchase will apply to the purchase of this product.  See full search results on eBay

Pisces Iscariot is ranked 6th best out of 22 albums by The Smashing Pumpkins on BestEverAlbums.com.

The best album by The Smashing Pumpkins is Siamese Dream which is ranked number 54 in the list of all-time albums with a total rank score of 22,849. 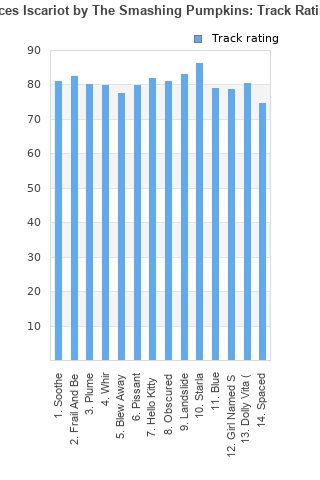 Rating metrics: Outliers can be removed when calculating a mean average to dampen the effects of ratings outside the normal distribution. This figure is provided as the trimmed mean. A high standard deviation can be legitimate, but can sometimes indicate 'gaming' is occurring. Consider a simplified example* of an item receiving ratings of 100, 50, & 0. The mean average rating would be 50. However, ratings of 55, 50 & 45 could also result in the same average. The second average might be more trusted because there is more consensus around a particular rating (a lower deviation).
(*In practice, some albums can have several thousand ratings)
This album is rated in the top 13% of all albums on BestEverAlbums.com. This album has a Bayesian average rating of 75.4/100, a mean average of 75.1/100, and a trimmed mean (excluding outliers) of 75.5/100. The standard deviation for this album is 12.4.

Considering the fact that these were b-sides and unreleased until then was crazy-this showed how great the pumpkins were in their heyday.

This is quite possibly my favourite b-sides collection. Songs like “Starla” and “Obscured” are among the best the Pumpkins ever offered. There are some cool covers like “Landslide” and “Girl Named Sandoz”. Overall very good and not to be overlooked!

Great album - more Gish than Siamese Dream which suits me. Personally I think some of their best tracks are on here - well worth it being an album in it's own right.

Whenever I listen to this album I feel like I'm looking out a window watching the rain fall in a comfy sweater.

Lots of people contend that the Pumpkins' b-sides were as good as, if not better, than the album tracks. Here's your chance to put that theory to the test. My weasely verdict is that some songs -- "Whir", "Frail And Bedazzled", "Obscured", "Dolly Vita", and "Spaced" stand up to anything on Gish or Siamese Dream. Others are deserved b-sides, and some, particularly the tedious "Starla" ("Drowned" winds up being a much better attempt at a feedback-laced magnum opus) would have been better off as fleeting abstractions in Billy's mind.

an absolutely breathtaking collection of b-sides. God only knows why they didnt release this is an actual full-length album as the majority of the music on this record is just as good if not better than any classic pumpkins a-sides. The opener "soothe" is possibly the most beautiful piece of music Corgan and co. have ever put down on paper. Never has the lead singer's (arguably) nasally voice come off as being so soft and pure, its 3 minutes of absolute bliss. Then you have your freak-rock moments such as "frailed and bedazzled" and "blew away"- which ultimately draw inspiration from Country music but could still make you mellow-the-fuck-out on any god-given day. The harder pieces such as "Pissant" and "Hello Kitty Kat" openly display the sheer magnitude of Corgan's inspiration from Black Sabbath, Depeche Mode etc. Then comes what is arguably the greatest cover of all time which needs no introduction. Other than this the clear standout for me personally is the 10 minute psychedelic epic "Starla", which stands head-and-shoulders above the other 13 tracks in terms of sheer quality, length (duh), ingenuity and utter freakout-brilliance. Never has blowing smoke to a b-side collection made you so content with life. Give this collection a try.

The b-sides from these guys were equally good as the a-sides.

'Landslide' is the stand alone but overall it has a few other decent songs.

A collection of b-sides and rarities from the Gish/Siamese Dream era. Not for everyone but if you have any love for those albums at all then you need this. Landslide alone is enough to recommend it.

Your feedback for Pisces Iscariot