Let's Get Out Of This Country (studio album) by Camera Obscura 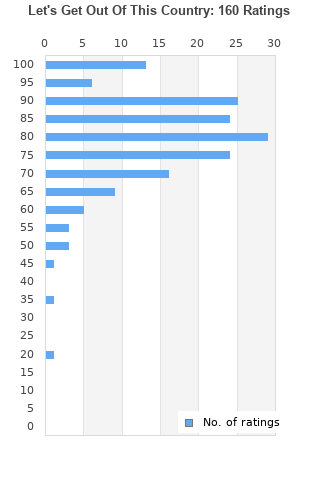 Camera Obscura : Lets Get Out of This Country CD
Condition: Very Good
$5.82

Let's Get Out Of This Country is ranked as the best album by Camera Obscura.

Listen to Let's Get Out Of This Country on YouTube 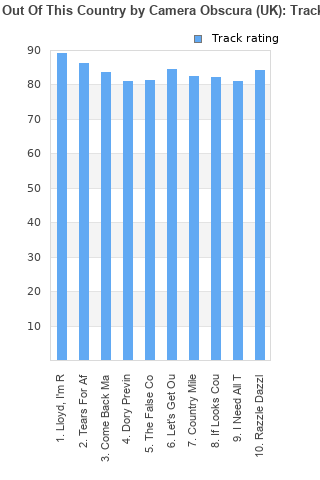 Let's Get Out Of This Country rankings

Let's Get Out Of This Country collection

Let's Get Out Of This Country ratings

Rating metrics: Outliers can be removed when calculating a mean average to dampen the effects of ratings outside the normal distribution. This figure is provided as the trimmed mean. A high standard deviation can be legitimate, but can sometimes indicate 'gaming' is occurring. Consider a simplified example* of an item receiving ratings of 100, 50, & 0. The mean average rating would be 50. However, ratings of 55, 50 & 45 could also result in the same average. The second average might be more trusted because there is more consensus around a particular rating (a lower deviation).
(*In practice, some albums can have several thousand ratings)
This album is rated in the top 2% of all albums on BestEverAlbums.com. This album has a Bayesian average rating of 79.6/100, a mean average of 79.3/100, and a trimmed mean (excluding outliers) of 80.0/100. The standard deviation for this album is 13.2.

Let's Get Out Of This Country favourites

Let's Get Out Of This Country comments

kind of boring, no memorable melodies at all plus that annyoing echo effect throughout whole cd

Lloyd is such a great pop tune. Better than owt lloyd actually did!

Tracyanne's voice starts to change from this album(from cute to more mature) I like earlier one. But songwriting is awesome on here. very possibly best of their albums. Maybe, they just grew up.

You can hear it on "If Looks Could Kill". This band not only evokes Belle and Sebastian but shows potential to surpass them. Yes, it's a lazy comparison but it's so obvious it's undeniable. "Lloyd, I'm Ready To Be Heartbroken" pays its own homage as a beautiful way to start off their brand of swelling strings and harmonies. Hear them fill your heart on "Come Back Margaret" and "Country Mile". Yes, it reminds me of Belle & Sebastian, but at the same time, they've stepped so far on their own with this album that such comparisons should stop, as easy as they are.

One of the most beautiful albums of all time.

Your feedback for Let's Get Out Of This Country