The Pod (studio album) by Ween 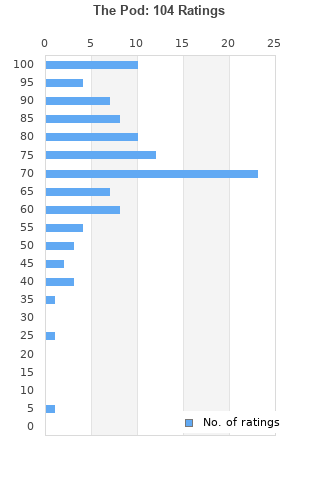 The Pod is ranked 6th best out of 22 albums by Ween on BestEverAlbums.com.

The best album by Ween is The Mollusk which is ranked number 456 in the list of all-time albums with a total rank score of 4,277. 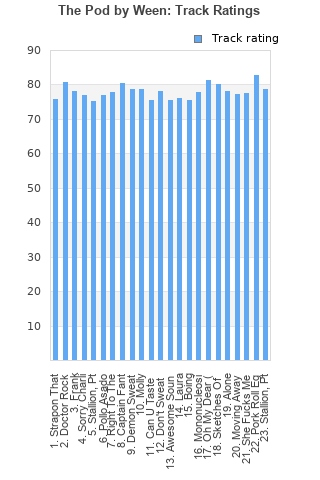 Rating metrics: Outliers can be removed when calculating a mean average to dampen the effects of ratings outside the normal distribution. This figure is provided as the trimmed mean. A high standard deviation can be legitimate, but can sometimes indicate 'gaming' is occurring. Consider a simplified example* of an item receiving ratings of 100, 50, & 0. The mean average rating would be 50. However, ratings of 55, 50 & 45 could also result in the same average. The second average might be more trusted because there is more consensus around a particular rating (a lower deviation).
(*In practice, some albums can have several thousand ratings)
This album is rated in the top 18% of all albums on BestEverAlbums.com. This album has a Bayesian average rating of 74.8/100, a mean average of 73.4/100, and a trimmed mean (excluding outliers) of 74.9/100. The standard deviation for this album is 19.0.

If only I could listen to this album again for the first time.

I agree that this is hard to sit through the first time around. However, once you give it a few more listens you start to realize just how amazing this album is. Starting off with great songs like Dr. Rock, Sorry Charlie, Pollo Asada, Right to the ways and the rules of the world, this album hits you hard with gems. As it goes on, you get slower and songs with a lower pitch. The climax of pork roll egg and cheese is definitely one of the best endings to an album. The only clear flaw is having the stallion pt. 2 after pork roll egg and cheese. Pork roll even ends with a thanks for listening saying its the end. This may not be easy to get into, but is definitely worth while if you can.

I've hard literally such a hard time getting through this album even ONCE. Dense as you can possibly get, and the fact that it's 75+ minutes doesn't help much. Only three real gems here honestly, which are Pork Roll Egg and Cheese, Captain Fantasy and (Oh My Dear) Falling in Love.

Your feedback for The Pod