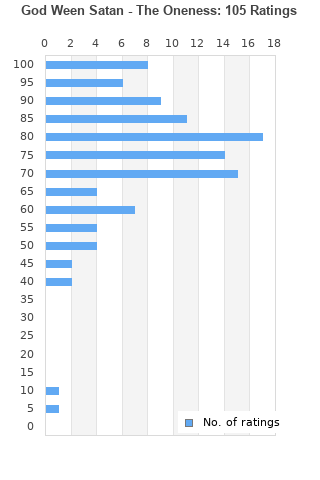 God Ween Satan - The Oneness is ranked 6th best out of 22 albums by Ween on BestEverAlbums.com.

The best album by Ween is The Mollusk which is ranked number 451 in the list of all-time albums with a total rank score of 4,334.

Listen to God Ween Satan - The Oneness on YouTube 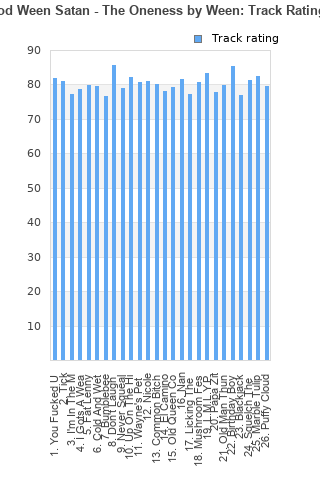 Rating metrics: Outliers can be removed when calculating a mean average to dampen the effects of ratings outside the normal distribution. This figure is provided as the trimmed mean. A high standard deviation can be legitimate, but can sometimes indicate 'gaming' is occurring. Consider a simplified example* of an item receiving ratings of 100, 50, & 0. The mean average rating would be 50. However, ratings of 55, 50 & 45 could also result in the same average. The second average might be more trusted because there is more consensus around a particular rating (a lower deviation).
(*In practice, some albums can have several thousand ratings)
This album is rated in the top 6% of all albums on BestEverAlbums.com. This album has a Bayesian average rating of 76.8/100, a mean average of 76.4/100, and a trimmed mean (excluding outliers) of 77.2/100. The standard deviation for this album is 16.2.

Pretty mixed bag overall, but there are a couple great songs on here.

This album is just so...strange. It's absurd and messy. But when I listen to it, I have this weird urge to keep on listening to see what happens next. I would say it's similar to something that you'd find on Adult Swim, maybe like 12 oz. Mouse: the quality is far from polished, nothing seems to make sense, and it almost feels like everything was hastily thrown together at the last minute. But at the same time, it has this bizarre charm that draws me in and takes hold of my attention.

At its core, it’s really just two dudes goofing off and messing around. Some of the vocals and lyrics feel completely improvised, and a lot of the songs feature Gene Ween rambling in a way that sounds pretty similar to that one voice Adam Sandler always does. For some reason, I like that! What really keeps this project interesting is Ween's ability to jump across a wide variety of genres - a talent that they would later become known for. Some tracks could probably be classified as punk or avant-garde. You have reggae on “Nicole” and funk on “L.m.l.y.p.” You have “I’m in the Mood to Move,” which feels like some weird messed up line dance song, and “Up on the Hill,” which starts off like some twisted version of a gospel song and ends with distorted guitars. Some of my favorite tracks include the shoegaze inspired “Birthday Boy,” the rhythmic guitars paired with odd vocals on “Nan,” “Don’t Laugh (i Love You),” “Tick,” and “Hippy Smell” (which is on the anniversary edition).

This album does have it’s short comings though. Of course, when you have 26 songs on an album (29 on the anniversary edition), some of them are gonna be weaker than others. As a result, it tends to drag here and there for me, especially on the 8+ minute songs. The whole thing is about an hour and 15 minutes long. If you’re listening to it for the first time, it might be hard to get through the whole thing in one sitting. For me, the low point is definitely “Blackjack.” I don’t really mind that the instrumentation is sparse and experimental, but the lyrics get a yikes from me. I get that most of these songs aren’t meant to be taken seriously and are meant to be jokes, but even with that in mind, this lyrics still just feel questionable/problematic to me…and to be honest, maybe a little racist. Not trying to be a hater or stir up controversy here, I just wanna be honest with how I feel.

All in all, this album is a bit of an enigma. I could see how someone might love this album and think it’s amazing. I could also see how someone might hate this album and think it sucks. As for me, I find this album both chaotic and entertaining, and I enjoy the absurd journey that it takes the listener on. It’s pretty impressive that on their first record, Ween already knew who they were as a band. A fitting beginning for Ween’s eccentric and fascinating music career.

Also, it takes some brass balls for your first song you put on your debut album to be "You Fucked Up"

That was so stupid.
And pretty damn good too.

I'll be completely honest by saying I had no idea what was going on when listening through this album even for the third time through but it was such a strange and interesting journey.

Your feedback for God Ween Satan - The Oneness