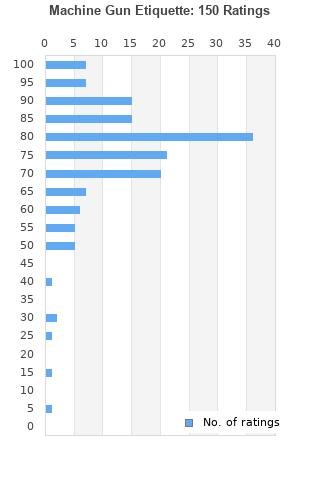 Machine Gun Etiquette
Condition: Brand New
Time left: 12h 34m 46s
Ships to: Worldwide
$18.57
Go to store
Product prices and availability are accurate as of the date indicated and are subject to change. Any price and availability information displayed on the linked website at the time of purchase will apply to the purchase of this product.  See full search results on eBay

Machine Gun Etiquette is ranked 2nd best out of 16 albums by The Damned on BestEverAlbums.com. 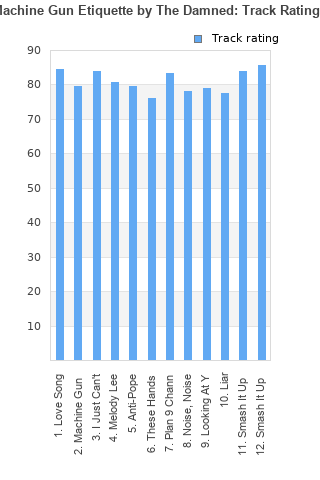 Rating metrics: Outliers can be removed when calculating a mean average to dampen the effects of ratings outside the normal distribution. This figure is provided as the trimmed mean. A high standard deviation can be legitimate, but can sometimes indicate 'gaming' is occurring. Consider a simplified example* of an item receiving ratings of 100, 50, & 0. The mean average rating would be 50. However, ratings of 55, 50 & 45 could also result in the same average. The second average might be more trusted because there is more consensus around a particular rating (a lower deviation).
(*In practice, some albums can have several thousand ratings)
This album is rated in the top 7% of all albums on BestEverAlbums.com. This album has a mean average rating of 76.0/100. The trimmed mean (excluding outliers) is 76.6/100. The standard deviation for this album is 16.3.

How is this not rated higher on BEA!? This band has a very unique brand of melodic, almost psychedelic sounding punk and I love it! Definitely more mature than their debut, which was a little more generic in terms of style for the time (although I like that one as well). This album hits hard too. Never a dull moment. Gotta love Smash It Up too.

Outside of one track, it's pretty good

Can't believe I had to search for this one as I thought it would easily be top 20 of 1979. 45.....forty*******five!!!, i know 79 was a good year but come on. Great, great album with so many stellar tracks. Anti-pope with it's Magic Bus soundlike instrumental break is outstanding as is Plan 9 Channel 7.

My favourite punk album by my favourite punk band (is it really punk?) Every song a winner (unless you have the stupid extended version - don't you hate that). You just can't beat Smash It Up.

first in a trio of GREAT,GREAT albums with THE CAPTAIN taking over guitar and song writing....PSYCHEDELIC PUNK...the band kicks ass

What! The circus clown is the best track!! Not really, but I can't skip any of them, that's just not proper machine gun etiquette. (Plus the forward button on my i-pod is broken, so that's the real reason)

Your feedback for Machine Gun Etiquette