A Kind Of Magic (album) by Queen 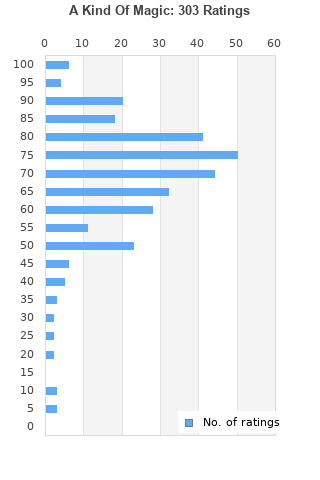 A Kind Of Magic is ranked 11th best out of 46 albums by Queen on BestEverAlbums.com.

The best album by Queen is A Night At The Opera which is ranked number 86 in the list of all-time albums with a total rank score of 17,828. 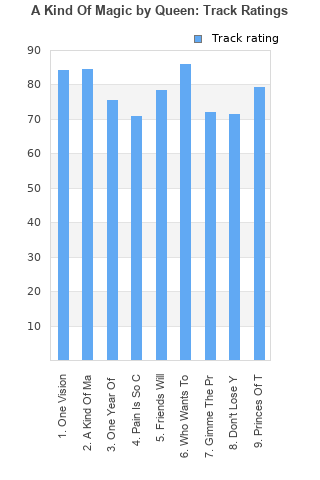 A Kind Of Magic rankings

A Kind Of Magic collection

A Kind Of Magic ratings

Outliers can be removed when calculating a mean average to dampen the effects of ratings outside the normal distribution. This figure is provided as the trimmed mean. A high standard deviation can be legitimate, but can sometimes indicate 'gaming' is occurring. Consider a simplified example* of an item receiving ratings of 100, 50, & 0. The mean average rating would be 50. However, ratings of 55, 50 & 45 could also result in the same average. The second average might be more trusted because there is more consensus around a particular rating (a lower deviation).
(*In practice, some albums can have several thousand ratings)
This album has a mean average rating of 68.0/100. The trimmed mean (excluding outliers) is 68.7/100. The standard deviation for this album is 16.7.

A Kind Of Magic favourites

A Kind Of Magic comments

I would have sworn pain is so close to pleasure was from hot space. I always thought that. Shit remaster, hey ho. Decent album though, maybe it's nostalgia.

Definitely not Queen's greatest but I still think AKOM is a solid release. While the record does have inconsistencies, I enjoy most of the songs.

In my opinion, Who Wants to Live Forever is Queen's best song of the 80s.

One Vision contains one of Queen's best album intros (something they would open their Magic Tours with) and the rest of the song is a classic 80s Queen rocker, similar to Hammer to Fall. Some fantastic drumming by Roger on this

A Kind of Magic is a really catchy pop-rock tune.

Princes of the Universe is a fantastic track. It's really underrated. Really exciting rocker that is also one of the most creative songs on the album.

One Year of Love and Friends Will Be Friends are solid tracks.

Gimme the Prize, Don't Lose Your Head, and Pain is so Close to Pleasure kind of suck in my opinion.

It’s difficult to view A Kind Of Magic as a coherent statement, since most of the songs have their origins in movie soundtracks. The only two songs here that rate among Queen’s best are the opening group composed anthem ‘One Vision’ and May’s beautiful ‘Who Wants To Live Forever’.

A very messy album. Really, it's just a hotchpotch album of songs written for highlander, a meant to be stand alone single and a few hastily written new tracks. Again, like all their later albums the singles are the best songs. One vision, the title track are very good but who wants to live forever is simply majestic. Friends will be friends is kind of an inferior we are the champions. One year of love is nice and don't lose your head is interesting but pain is so close to pleasure and gimme the prize are awful. Again, like most queen albums it's an enjoyable listen, but is very uneven. Still it ends well with prince's of the universe which sounds like a hark back to queen 2 era. All in all, ok.

I think it's more the film Highlander and this music goes so well for that film. The heavy songs on this are awesome. Gimme The Prize fuckin rocks

Maybe the songs are not as bad as this poor 80`s sound.
I cannot love this album.

Don't lose your head, just because it sounds like a guilty pleasure, it doesn't have to be rated ridiculously low! I love this album, it's a lovely collection of songs.

As long as you don't take it seriously (at all), it's a fantastic album with no bad tracks and plenty of great ones.

Your feedback for A Kind Of Magic