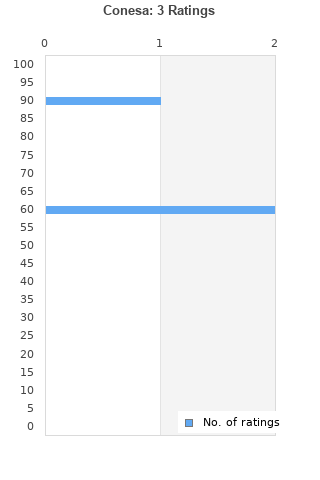 Conesa is ranked as the best album by Pedro Y Pablo.

No tracks have been rated on this album yet.
#
Track
Rating/Comments
1.
Padre Francisco
Rating: Not enough dataComments:

This album, one of the first ones in Argentina (Talking about rock music) was recorded with by Miguel Cantilo (Pedro) and Jorge Durietz (Pablo) were the core of the band were important peolple in the hippie´s ambient in the country and they travelled for all Argentina playing their music, also, specially for this album a lot of musicians participated in the recording.

The songs:
Padre Francisco (Reverend Franciso) tells the story about an underestimated reverend that was very liked by Pedro & Pablo, Francisco was comunist and gave discourses all the time talking about the faith.
Blues Del Éxodo (Exodus Blues) a theme that talks about an escape from the capital, travelling like a backpacking with hippies and looking for peace.
Canción del Ser (Be´s Song) is a Pedro´s poesy of the to be, accompained with music.
Barco Pálido (Pale Boat) speaks about a broken ship which saunters around the sea.
Instrucciones (Instructions) a Pablo´s song, very phisolophical that disputes our style of life.
El Bolsón de Los Cerros (El Bolsón of the Hills) it´s a song dedicated to El Bolsón, the capital of the hippism in Argentina where all the backpacking goes since the 60s.
Apremiso Ilegales (Ilegal Constraints) a protest song to all the injustices that were comitted with the hippies and the "weird" people in a half metaphor.
Catalina Bahía (Catelyn Bay) a romantic song composed by Pedro.
El Alba del Estío (Summer´s Dawn) A journey guied by the dawn, the track describes it and all the landscape. (An adaption from Rimbaud´s poem "Dawn")

Your feedback for Conesa