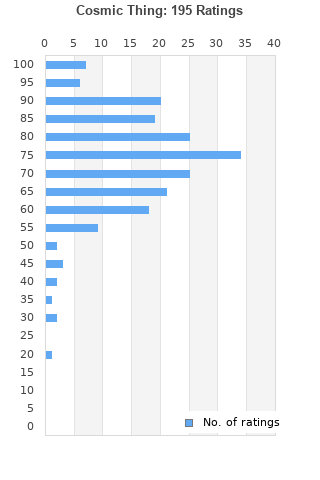 The B-52's ‎– Cosmic Thing - CD (C1131)
Condition: Very Good
Time left: 2h 25m 55s
Ships to: Worldwide
$22.00
Go to store
Product prices and availability are accurate as of the date indicated and are subject to change. Any price and availability information displayed on the linked website at the time of purchase will apply to the purchase of this product.  See full search results on eBay

Cosmic Thing is ranked 2nd best out of 15 albums by The B-52's on BestEverAlbums.com. 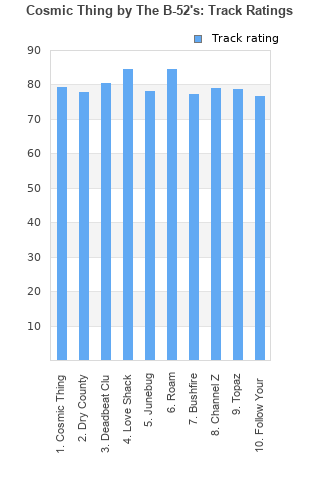 Rating metrics: Outliers can be removed when calculating a mean average to dampen the effects of ratings outside the normal distribution. This figure is provided as the trimmed mean. A high standard deviation can be legitimate, but can sometimes indicate 'gaming' is occurring. Consider a simplified example* of an item receiving ratings of 100, 50, & 0. The mean average rating would be 50. However, ratings of 55, 50 & 45 could also result in the same average. The second average might be more trusted because there is more consensus around a particular rating (a lower deviation).
(*In practice, some albums can have several thousand ratings)
This album has a Bayesian average rating of 74.1/100, a mean average of 73.9/100, and a trimmed mean (excluding outliers) of 74.1/100. The standard deviation for this album is 13.3.

I prefer their earlier albums but this is a great album. What makes it a slight miss is that the songs that aren't good are not worth playing. Roam is the best of the 5 songs I listen to

Love Shack is one of my least favourite B52's tracks, Roam one of their best, and that sums this album up for me. A few too many tracks that are shown up a litte too much by the best of the others - Roam, Dry Country - still a decent listen though.

I decent, summer album. Check out the two part harmonies with the female singers.

Massive comeback, but still a little inconsistent. Stick with a compilation or their debut.

Right as everyone wrote them off as dead after Ricky Wilson's death and the subsequent failure of the underrated "Bouncing Off The Satellites", they came back bigger than ever. I am partial to the earlier records and admit that "Love Shack" isn't one of my fave B-52's songs but as a whole a very solid album that deserves to be known for more than that one overplayed hit.

Not anywhere near as much fun as the early albums. When the people throwing the party start sounding old, it's time to find a new and better one.

Your feedback for Cosmic Thing