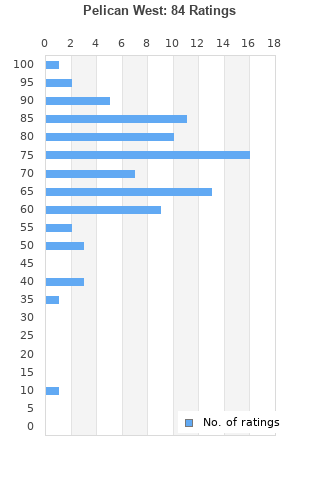 T-13 HAIRCUT ONE HUNDRED Pelican West ...... 1982 ...... AL 6600
Condition: Used
Time left: 26m 53s
Ships to: Worldwide
$24.95
Go to store
Product prices and availability are accurate as of the date indicated and are subject to change. Any price and availability information displayed on the linked website at the time of purchase will apply to the purchase of this product.  See full search results on eBay

Pelican West is ranked as the best album by Haircut One Hundred. 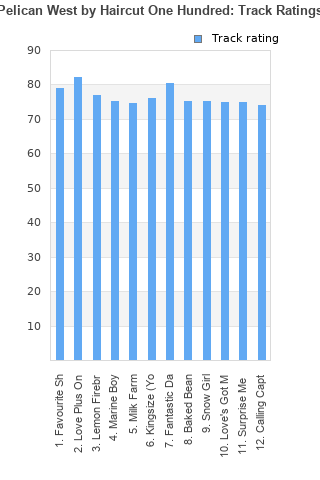 Rating metrics: Outliers can be removed when calculating a mean average to dampen the effects of ratings outside the normal distribution. This figure is provided as the trimmed mean. A high standard deviation can be legitimate, but can sometimes indicate 'gaming' is occurring. Consider a simplified example* of an item receiving ratings of 100, 50, & 0. The mean average rating would be 50. However, ratings of 55, 50 & 45 could also result in the same average. The second average might be more trusted because there is more consensus around a particular rating (a lower deviation).
(*In practice, some albums can have several thousand ratings)
This album has a Bayesian average rating of 72.4/100, a mean average of 72.2/100, and a trimmed mean (excluding outliers) of 72.2/100. The standard deviation for this album is 14.3.

Teenybopper Brit-pop tunes with some funk/Latin characteristics thrown in. A little monotonous but still fairly strong, and worth checking out for fans of artists like The English Beat, Orange Juice, XTC, etc.

Teenybopper Brit-pop tunes with a slight funk/Latin influence. This album is worth a listen if you admire bands along the lines of The English Beat, Orange Juice, XTC, etc. "Love Plus One" is the best song on the album, in my opinion.

dynamic, slightly hectic, but cheerful samba-funk-soul pop songs with an international flair. you can listen to this record good - it's easing and peppy. (i recommend to start listening with the track kingsize, then marine boy).

Your feedback for Pelican West