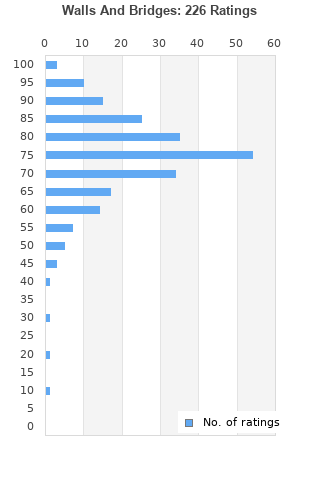 JOHN LENNON - WALLS AND BRIDGES - EXCELLENT
Condition: Used
Time left: 4h 26m 35s
Ships to: Worldwide
$26.99
Go to store
Product prices and availability are accurate as of the date indicated and are subject to change. Any price and availability information displayed on the linked website at the time of purchase will apply to the purchase of this product.  See full search results on eBay

Walls And Bridges is ranked 4th best out of 20 albums by John Lennon on BestEverAlbums.com.

The best album by John Lennon is John Lennon/Plastic Ono Band which is ranked number 147 in the list of all-time albums with a total rank score of 12,236. 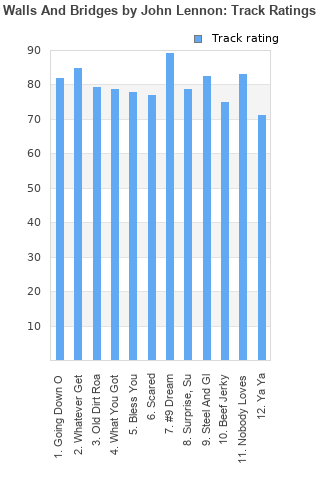 Rating metrics: Outliers can be removed when calculating a mean average to dampen the effects of ratings outside the normal distribution. This figure is provided as the trimmed mean. A high standard deviation can be legitimate, but can sometimes indicate 'gaming' is occurring. Consider a simplified example* of an item receiving ratings of 100, 50, & 0. The mean average rating would be 50. However, ratings of 55, 50 & 45 could also result in the same average. The second average might be more trusted because there is more consensus around a particular rating (a lower deviation).
(*In practice, some albums can have several thousand ratings)
This album is rated in the top 24% of all albums on BestEverAlbums.com. This album has a Bayesian average rating of 74.5/100, a mean average of 73.8/100, and a trimmed mean (excluding outliers) of 74.6/100. The standard deviation for this album is 13.1.

Overlooked Lennon Album. I really like Going Down on Love, Steel and Glass, and #9 Dream. His singing on Bless You is beautiful.

The best word to describe this album as a lot of fans have said is Underrated, it's his 3rd best album of the 70's behind Imagine & Plastic Ono Band. Whatever Gets U Thru The Night, No.9 Dream & Nobody Loves You standout but Steel & Glass and Old Dirt Road are also great.

A good if not great Lennon album. It has some fine tracks with the two biggies, Whatever gets you thru the night, and the excellent, #9 dream, are two of the highlights. Bless you, is another standout. This would be Lennon's last album of original material until, Double fantasy, in 1980 and although it is nowhere near his greatest work it is still a good album.

By John Lennon standards it is not a great album, they are no bad songs on it. But they are not many really good songs. Leaving aside two singles the other songs i like are going down on love,what you got,suprise suprise(sweet bird of bardox)and steel and glass.

One of the most underrated albums of the 70’s. It’s not a classic like Imagine, but it’s better than most critics made out at the time. I listen to it a lot. No9 Dream is gorgeous. Whatever gets you through the night great fun and Scared a lost classic. Deserves more attention.

Overall a uninspired album by John. Lacks his grip as a lyricist, and overall lacks attitude.

Very underrated album that's really his third best along with Imagine and Plastic Ono Band. It isn't a game changer, but like Wings Band On The Run, this was his commercial comeback and possibly his most accessible album. #9 Dream is a masterpiece that could have fit on a possible 70's Beatles album very well, and Whatever Gets You Thru the night isn't only his funnest song, but possibly one of Elton John's best recordings as well!

Very good album.
IMO only PlasticOBand and Imagine are better than this one.

Your feedback for Walls And Bridges