Fear Of A Black Planet (studio album) by Public Enemy 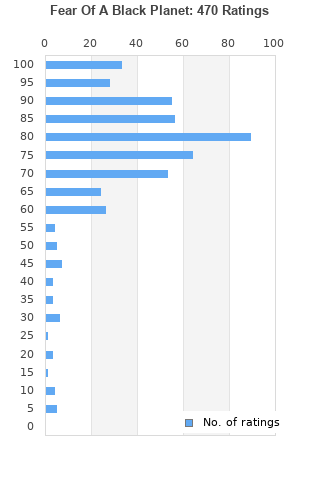 Fear Of A Black Planet is ranked 2nd best out of 15 albums by Public Enemy on BestEverAlbums.com.

The best album by Public Enemy is It Takes A Nation Of Millions To Hold Us Back which is ranked number 249 in the list of all-time albums with a total rank score of 7,397.

Listen to Fear Of A Black Planet on YouTube 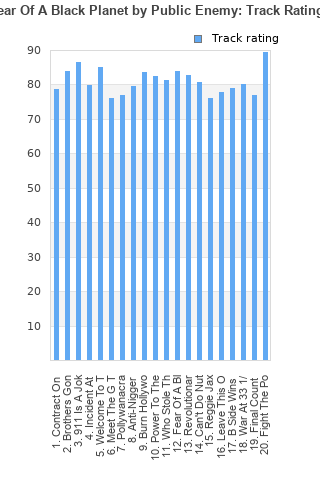 0
19.
Final Count Of The Collision Between Us And The Damned
Rating: 77 (46 votes)Comments:

Fear Of A Black Planet rankings

Fear Of A Black Planet collection

Fear Of A Black Planet ratings

Rating metrics: Outliers can be removed when calculating a mean average to dampen the effects of ratings outside the normal distribution. This figure is provided as the trimmed mean. A high standard deviation can be legitimate, but can sometimes indicate 'gaming' is occurring. Consider a simplified example* of an item receiving ratings of 100, 50, & 0. The mean average rating would be 50. However, ratings of 55, 50 & 45 could also result in the same average. The second average might be more trusted because there is more consensus around a particular rating (a lower deviation).
(*In practice, some albums can have several thousand ratings)
This album is rated in the top 3% of all albums on BestEverAlbums.com. This album has a Bayesian average rating of 78.1/100, a mean average of 76.3/100, and a trimmed mean (excluding outliers) of 78.2/100. The standard deviation for this album is 17.8.

Fear Of A Black Planet favourites

Fear Of A Black Planet comments

This album does not sound very good.

Lyrically awesome. Seems to be a voice to empower black Gen-Xers. Production is quite poor by today's standards though, severely diminishing the quality of the album. Would have loved to hear Fear Of A Black Planet if it was produced by Dre, for example.

I had to listen to this twice to realize how refreshingly anti-misogynistic it is.

Fav. Tracks: Brothers Gonna Work It Out, 911 Is A Joke, Welcome To The Terrordrome, Who Stole The Soul?, Fear Of A Black Planet, Fight The Power.

Some of the production choices are a bit iffy, but the messages they purvey are incredibly important, and remain so even today. The personalities on Fear of a Black Planet are strong and attention grabbing.

Like a bomb ass three legged table, if any individual leg were to break the entire structure would keel over. Its remarkable how Terminator X, Chuck, and Flava flav elevate and uplift one another's talents, each accenting the others perfectly

Some of the best hip-hop right here! Could be shortened a bit, but the vibe persists throughout.

Dad-Hip-Hop? Whether, this album is still as intense and invigorating as all get out, never relenting on the bully-ball, confrotational attitude for a full hour and that dense sample-a-licious production suits it perfectly.

Your feedback for Fear Of A Black Planet