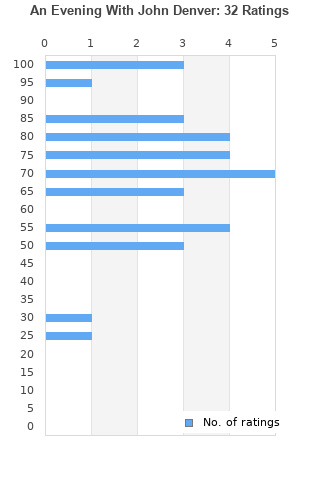 John Denver - An Evening With John Denver 2LP 1975 (VG+/VG+) '
Condition: Used
Time left: 9h 52m 50s
Ships to: Worldwide
EUR 5.99
Go to store
Product prices and availability are accurate as of the date indicated and are subject to change. Any price and availability information displayed on the linked website at the time of purchase will apply to the purchase of this product.  See full search results on eBay

An Evening With John Denver is ranked 2nd best out of 30 albums by John Denver on BestEverAlbums.com.

The best album by John Denver is Back Home Again which is ranked number 7014 in the list of all-time albums with a total rank score of 175. 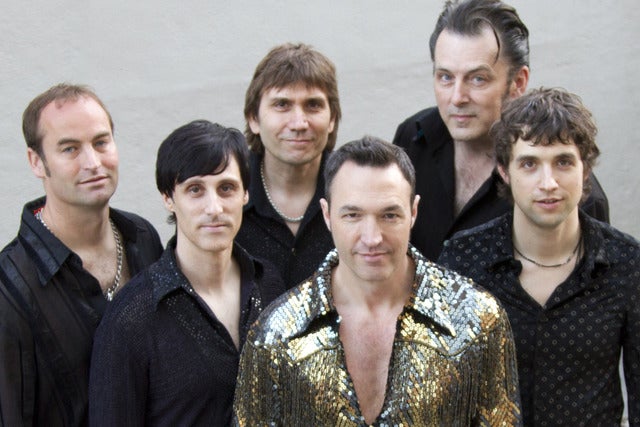 Listen to An Evening With John Denver on YouTube 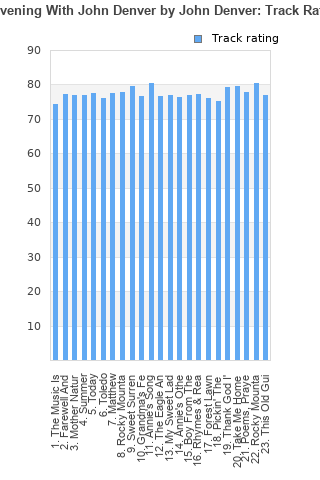 An Evening With John Denver rankings

An Evening With John Denver collection

An Evening With John Denver ratings

Rating metrics: Outliers can be removed when calculating a mean average to dampen the effects of ratings outside the normal distribution. This figure is provided as the trimmed mean. A high standard deviation can be legitimate, but can sometimes indicate 'gaming' is occurring. Consider a simplified example* of an item receiving ratings of 100, 50, & 0. The mean average rating would be 50. However, ratings of 55, 50 & 45 could also result in the same average. The second average might be more trusted because there is more consensus around a particular rating (a lower deviation).
(*In practice, some albums can have several thousand ratings)
This album has a Bayesian average rating of 71.7/100, a mean average of 71.1/100, and a trimmed mean (excluding outliers) of 71.1/100. The standard deviation for this album is 18.6.

An Evening With John Denver favourites

An Evening With John Denver comments

I listened to this every night for about a year as a kid. Off and on over the last 40 years. Every song seems a classic. It is a fun and though provoking album. Rocky Mountain High and Matthew are the standouts on theis old gem.

A good "live" record by a great singer/songwriter. Sounds a bit dated now.

Better line-up of songs than on his "Greatest Hits" album.

Your feedback for An Evening With John Denver