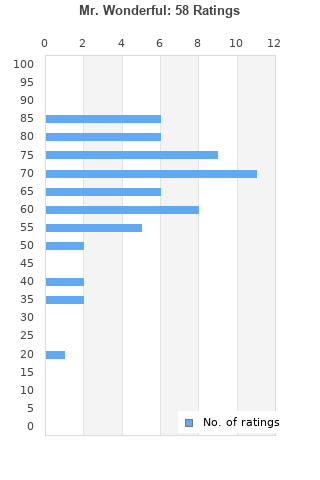 Mr. Wonderful is ranked 2nd best out of 7 albums by Action Bronson on BestEverAlbums.com.

The best album by Action Bronson is Dr. Lecter which is ranked number 18280 in the list of all-time albums with a total rank score of 55. 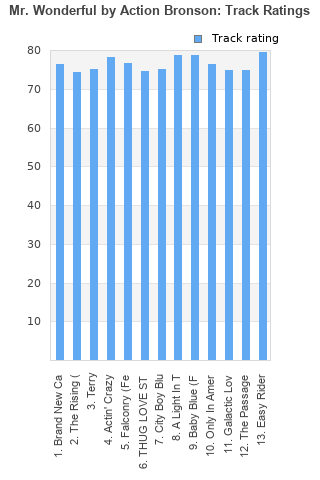 Rating metrics: Outliers can be removed when calculating a mean average to dampen the effects of ratings outside the normal distribution. This figure is provided as the trimmed mean. A high standard deviation can be legitimate, but can sometimes indicate 'gaming' is occurring. Consider a simplified example* of an item receiving ratings of 100, 50, & 0. The mean average rating would be 50. However, ratings of 55, 50 & 45 could also result in the same average. The second average might be more trusted because there is more consensus around a particular rating (a lower deviation).
(*In practice, some albums can have several thousand ratings)
This album has a Bayesian average rating of 67.5/100, a mean average of 65.7/100, and a trimmed mean (excluding outliers) of 66.5/100. The standard deviation for this album is 13.6.

A cheerful, uplifting, album with no aspirations to be anything else, simply an easy listening, highly enjoyable and provides tons of fun. Even though entertainment is clearly its primary goal, it doesn't settle for a simple and straightforward sound, it is willing to experiment and you can tell there was some thought - not too much, just enough to keep it from being overly simplistic - and a lot of passion involved in making this. The lyrics are nothing special, but it's one of those cases you can safely ignore them, they neither elevate nor diminish the other aspects of the album.

Yall are mad if you don't like this. It's ridiculously fun.

What it lacks in quality, it easily makes up for it's enjoyment. I'd do without some lyrics...

Your feedback for Mr. Wonderful