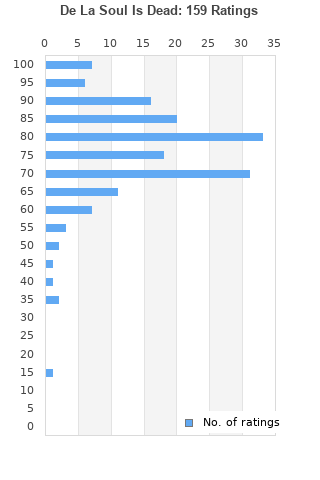 De La Soul – De La Soul Is Dead Big Life Advance Promo Tape Cassette Album
Condition: Very Good
Time left: 1d 7h 22m 19s
Ships to: Worldwide
£29.97
Go to store
Product prices and availability are accurate as of the date indicated and are subject to change. Any price and availability information displayed on the linked website at the time of purchase will apply to the purchase of this product.  See full search results on eBay

De La Soul Is Dead is ranked 2nd best out of 10 albums by De La Soul on BestEverAlbums.com.

The best album by De La Soul is 3 Feet High And Rising which is ranked number 519 in the list of all-time albums with a total rank score of 3,655.

Listen to De La Soul Is Dead on YouTube 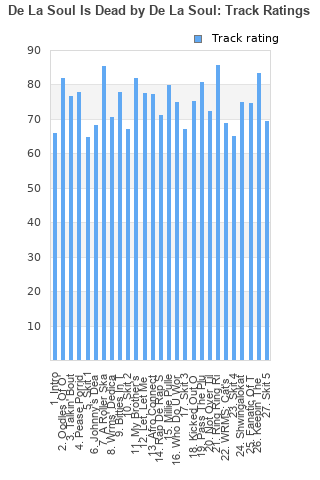 Rating metrics: Outliers can be removed when calculating a mean average to dampen the effects of ratings outside the normal distribution. This figure is provided as the trimmed mean. A high standard deviation can be legitimate, but can sometimes indicate 'gaming' is occurring. Consider a simplified example* of an item receiving ratings of 100, 50, & 0. The mean average rating would be 50. However, ratings of 55, 50 & 45 could also result in the same average. The second average might be more trusted because there is more consensus around a particular rating (a lower deviation).
(*In practice, some albums can have several thousand ratings)
This album is rated in the top 6% of all albums on BestEverAlbums.com. This album has a Bayesian average rating of 76.6/100, a mean average of 75.9/100, and a trimmed mean (excluding outliers) of 76.9/100. The standard deviation for this album is 13.4.

There are some really strong tracks on this, but it's not concentrated at all.

Not on par with 3 Feet, but still funky and fresh. I agree with Paladiasiac - they seem a little unfocused here.

There are a lot of skits, jokes, bantering and general foolin' around on this album. These guys have skills, but don't really start showin' them off sans distractions until their roller skating jam. I applaud their attempt at abstraction and lack of typical song structure, but it often just comes off as screwin' around. All this talk about daisies, burger buyin', bf/gf tiffs and extended skits just makes me want to reach for "3 Feet High...". This is a sometimes-funky misstep.

Your feedback for De La Soul Is Dead