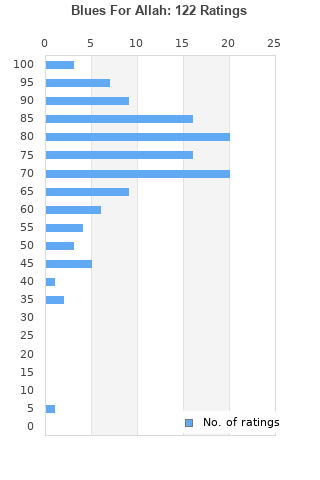 Blues For Allah is ranked 6th best out of 154 albums by Grateful Dead on BestEverAlbums.com.

The best album by Grateful Dead is American Beauty which is ranked number 310 in the list of all-time albums with a total rank score of 6,397. 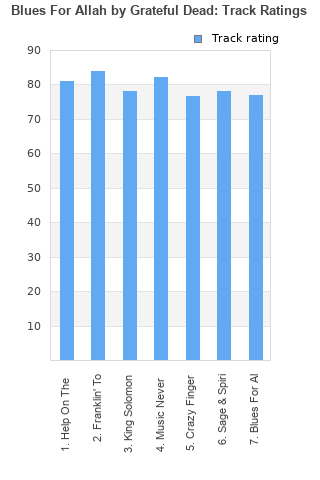 Outliers can be removed when calculating a mean average to dampen the effects of ratings outside the normal distribution. This figure is provided as the trimmed mean. A high standard deviation can be legitimate, but can sometimes indicate 'gaming' is occurring. Consider a simplified example* of an item receiving ratings of 100, 50, & 0. The mean average rating would be 50. However, ratings of 55, 50 & 45 could also result in the same average. The second average might be more trusted because there is more consensus around a particular rating (a lower deviation).
(*In practice, some albums can have several thousand ratings)
This album is rated in the top 17% of albums on BestEverAlbums.com. This album has a mean average rating of 74.0/100. The trimmed mean (excluding outliers) is 75.1/100. The standard deviation for this album is 15.7.

spacey, exploratory and original, a truly fantastic album. demands a complete listen to fully get the whole experience. Standouts are help-slipknot-franklin's tower, sage and spirit, and Blues for allah, king solomon's marbles, and crazy fingers.

This is a really good album. I need to be in the mood to listen to it as it's very atmospheric.

This is one of my favorite albums, I've listened to it countless times. that being said, I dont think Blues for Allah is the best song, i think its meant to be empty and desolate like a desert but its not incredibly fun to listen to and it's 12 minutes, also the flute in sage and spirit can bother my ears a bit, I still think both are good songs. 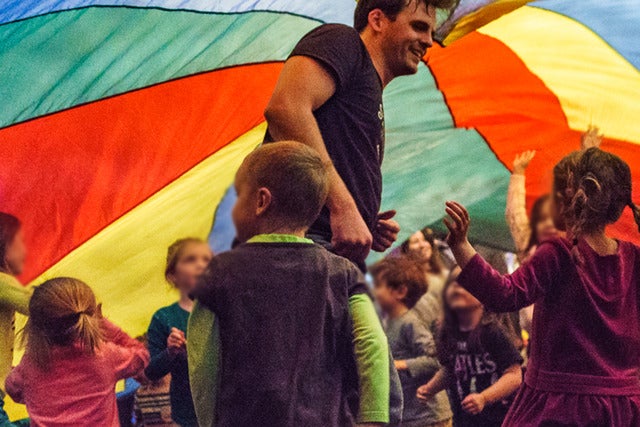 Music of the Grateful Dead for Kids
Garcia's at The Capitol Theatre, Port Chester, United States.

Music of the Grateful Dead for Kids
Garcia's at The Capitol Theatre, Port Chester, United States.

Your feedback for Blues For Allah