Another One (studio album) by Mac DeMarco 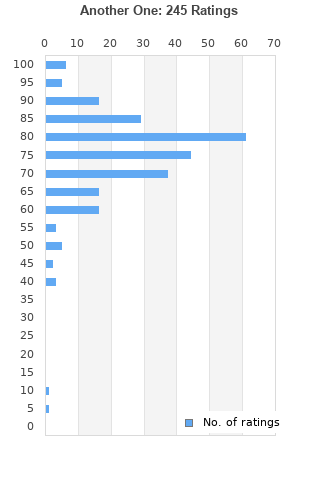 Mac Demarco Salad Days Demos Cassette Tape another one 2 rock & roll night club!
Condition: Brand New
Time left: 15h 51m 30s
Ships to: Worldwide
$11.99
Go to store
Product prices and availability are accurate as of the date indicated and are subject to change. Any price and availability information displayed on the linked website at the time of purchase will apply to the purchase of this product.  See full search results on eBay

Another One is ranked 4th best out of 12 albums by Mac DeMarco on BestEverAlbums.com.

The best album by Mac DeMarco is Salad Days which is ranked number 430 in the list of all-time albums with a total rank score of 4,537. 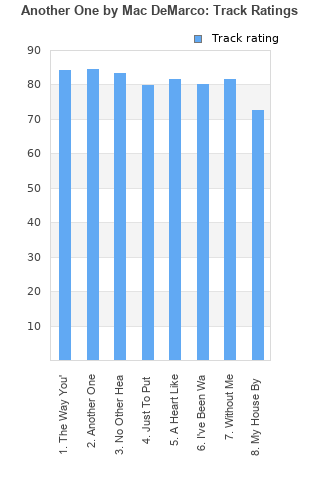 Rating metrics: Outliers can be removed when calculating a mean average to dampen the effects of ratings outside the normal distribution. This figure is provided as the trimmed mean. A high standard deviation can be legitimate, but can sometimes indicate 'gaming' is occurring. Consider a simplified example* of an item receiving ratings of 100, 50, & 0. The mean average rating would be 50. However, ratings of 55, 50 & 45 could also result in the same average. The second average might be more trusted because there is more consensus around a particular rating (a lower deviation).
(*In practice, some albums can have several thousand ratings)
This album is rated in the top 10% of all albums on BestEverAlbums.com. This album has a Bayesian average rating of 75.8/100, a mean average of 75.3/100, and a trimmed mean (excluding outliers) of 75.9/100. The standard deviation for this album is 12.6.

The last track is a waste of time, with a mildly melodic synth riff. The other stuff? Well, a lot of it is gold, especially A Heart Like Hers which is one of Mac's absolute finest. Great album.

Better than I expected, perfect transition from Salad Days into This Old Dog. 8.7/10.

Why couldn't this album have two more tracks? Love this a lot but needed a longer ride.

A brilliant, compact album with some great guitar work. Manages to feel very Mac Demarco while still being different from his earlier work. Brought down by occasional lazy writing (I wish he could come up with another drum riff).

Favorite Tracks: The Way You'd Love Her, Another One & No Other Heart

Mellow jams from one of my favorite new age hippies.

It's not as good as 2 or Salad Days, but it's Mac doing his awesome stuff. There's some great songs on here, and, although I wish it was longer, the short length keeps it consistent.
Best tracks: Another One, No Other Heart
Worst track: Without Me

I love it! It's certainly not anything radically different from his last records but it's still catchy as hell. I might even go so far as to call it his most consistent release yet.
"Just To Put Me Down" is perfect summery crooning to drink yourself to sleep to.

excellent ep
another one track is fucking awesome!

Your feedback for Another One