The Book Of Souls (studio album) by Iron Maiden 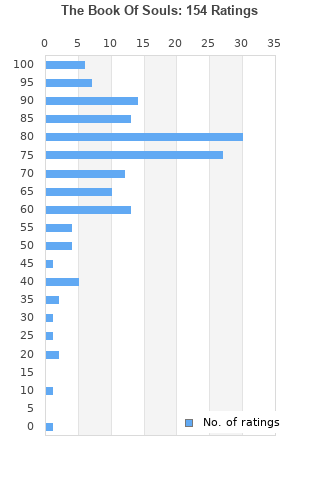 Iron Maiden - The Book Of Souls 2019 2CDs Digipack The studio Collection NEW
Condition: Brand New
Time left: 10h 5m 13s
Ships to: Worldwide
$49.99
Go to store
Product prices and availability are accurate as of the date indicated and are subject to change. Any price and availability information displayed on the linked website at the time of purchase will apply to the purchase of this product.  See full search results on eBay

The Book Of Souls is ranked 10th best out of 32 albums by Iron Maiden on BestEverAlbums.com.

The best album by Iron Maiden is The Number Of The Beast which is ranked number 279 in the list of all-time albums with a total rank score of 6,996. 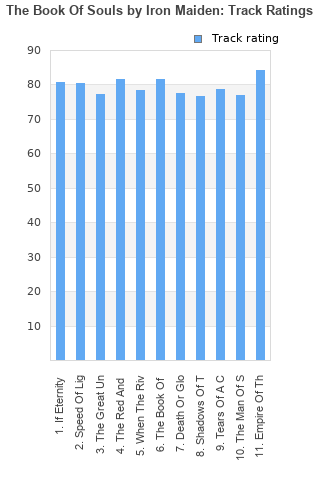 The Book Of Souls rankings

The Book Of Souls collection

The Book Of Souls ratings

Rating metrics: Outliers can be removed when calculating a mean average to dampen the effects of ratings outside the normal distribution. This figure is provided as the trimmed mean. A high standard deviation can be legitimate, but can sometimes indicate 'gaming' is occurring. Consider a simplified example* of an item receiving ratings of 100, 50, & 0. The mean average rating would be 50. However, ratings of 55, 50 & 45 could also result in the same average. The second average might be more trusted because there is more consensus around a particular rating (a lower deviation).
(*In practice, some albums can have several thousand ratings)
This album has a Bayesian average rating of 74.2/100, a mean average of 73.3/100, and a trimmed mean (excluding outliers) of 74.3/100. The standard deviation for this album is 18.1.

The Book Of Souls favourites

The Book Of Souls comments

It's interesting to note that appart from albums 7,8,11 and 12 every new Iron Maiden album is longer than the previous ones. It's showing well the direction of the band in term of production. But I think they'll have a hard time trying to make the next one longer.

Very Creative, kind of like a Beethoven's Ninth of Hair Metal.

The longest Iron Maiden album so far. It's probably a bit overlong to be honest, but there is some good stuff here. The first two tracks are excellent, and Bruce Dickinson's, empire of the clouds, is extremely enjoyable. Not as good as they used to be, but still fun.

But it doesn't really blow me away yet .... will keep listening and who knows

Empire of the Clouds. WOW!

My rating might change in the weeks to come, but I do agree with ricco94 that this might be the best album since Brave New World and then some. On first listen, it's the best since Seventh Son. A combination of proggy Maiden and heavy (nearly return to 80's form) Maiden. A lot of epic tracks here. Hopefully this will climb the ranks on this year's chart.

Probably the best from Dickinson's comeback. It's quite consistent, though it is very long. Better than I was expecting.

Your feedback for The Book Of Souls