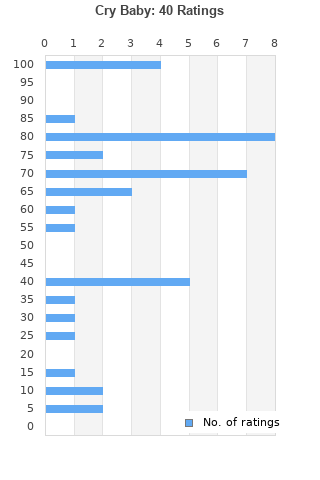 Cry Baby is ranked as the best album by Melanie Martinez. 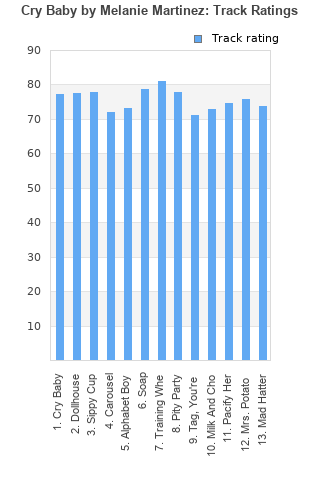 Rating metrics: Outliers can be removed when calculating a mean average to dampen the effects of ratings outside the normal distribution. This figure is provided as the trimmed mean. A high standard deviation can be legitimate, but can sometimes indicate 'gaming' is occurring. Consider a simplified example* of an item receiving ratings of 100, 50, & 0. The mean average rating would be 50. However, ratings of 55, 50 & 45 could also result in the same average. The second average might be more trusted because there is more consensus around a particular rating (a lower deviation).
(*In practice, some albums can have several thousand ratings)
This album has a Bayesian average rating of 65.6/100, a mean average of 63.6/100, and a trimmed mean (excluding outliers) of 63.6/100. The standard deviation for this album is 24.8.

Either the most demented nursery rhymes put to tape or simply just oddly fetishistic left-field pop- it's clean & smooth but in a disturbing state of arrested devolpment. Enigmatic at some points, strangely earnest in other places, it's a bit of a headspin despite the mostly same-y and deja-vu-ish nature of each song's production. More effective in it's individual tracks overall as it all starts to blur together a bit too much taken as a whole, but there's some promise here. Sounds like the music you'd get if you locked a 10-year-old Lana Del Rey in the basement for a year.

Your feedback for Cry Baby