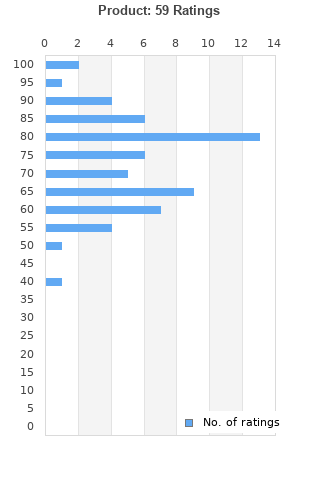 Sophie - Product CD [New CD] Japan - Import
Condition: Brand New
Time left: 5d 21h 37m 13s
Ships to: Worldwide
$26.56
Go to store
Product prices and availability are accurate as of the date indicated and are subject to change. Any price and availability information displayed on the linked website at the time of purchase will apply to the purchase of this product.  See full search results on eBay

Product is ranked 2nd best out of 4 albums by SOPHIE on BestEverAlbums.com.

The best album by SOPHIE is Oil Of Every Pearl's Un-Insides which is ranked number 1430 in the list of all-time albums with a total rank score of 1,252.

Tickets from Ticketmaster Get tickets
May
01
Sat
16:00 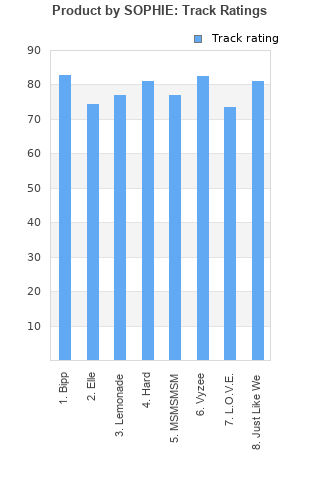 Rating metrics: Outliers can be removed when calculating a mean average to dampen the effects of ratings outside the normal distribution. This figure is provided as the trimmed mean. A high standard deviation can be legitimate, but can sometimes indicate 'gaming' is occurring. Consider a simplified example* of an item receiving ratings of 100, 50, & 0. The mean average rating would be 50. However, ratings of 55, 50 & 45 could also result in the same average. The second average might be more trusted because there is more consensus around a particular rating (a lower deviation).
(*In practice, some albums can have several thousand ratings)
This album has a Bayesian average rating of 73.8/100, a mean average of 73.9/100, and a trimmed mean (excluding outliers) of 73.9/100. The standard deviation for this album is 11.7.

I feel like I should enjoy this a lot more than I do. I will give this album is quirky and has interesting ideas. But after listening to her recent singles like Pony Boy or Face Shopping, this album feels somewhat primitive. Also by the tail end it just gets annoying. Hell L.O.V.E was just so awful I had to skip that son of a bitch.

Really interesting LP from SOPHIE with 8 wildly different tracks combining various different genres, from chiptune to EDM to the most abrasive noise music ever to exist (I'm talking about L.O.V.E.). I look forward to hearing more.

you know that emoji that is a hand making a zero meaning that you approve or you think something is cool? well, that emoji x100

Its a compilation of singles—sure. Not a true LP. But this reasserts Long's place in modern pop and electronic dance, and makes a case for one to look forward to forthcoming releases; despite the fact one of the new singles, "L.O.V.E" was quite underwhelming.

Your feedback for Product