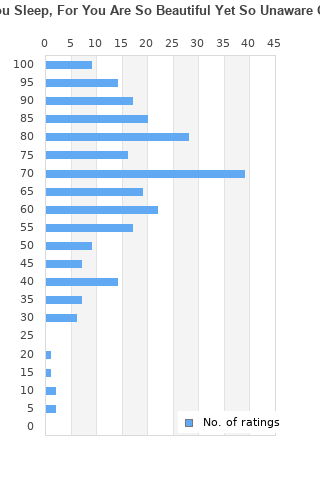 The 1975 Like It When You Sleep For You Are Beautiful Exclusive Pink Vinyl 2XLP
Condition: New
$86.00

I Like It When You Sleep For You Are So Beautiful Yet So Unaware Of It is ranked 2nd best out of 7 albums by The 1975 on BestEverAlbums.com.

The best album by The 1975 is A Brief Inquiry Into Online Relationships which is ranked number 1103 in the list of all-time albums with a total rank score of 1,667. 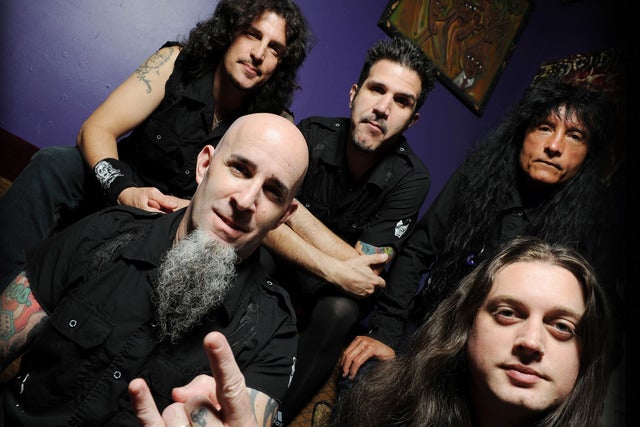 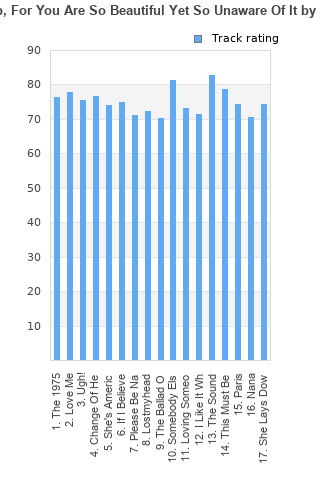 Rating metrics: Outliers can be removed when calculating a mean average to dampen the effects of ratings outside the normal distribution. This figure is provided as the trimmed mean. A high standard deviation can be legitimate, but can sometimes indicate 'gaming' is occurring. Consider a simplified example* of an item receiving ratings of 100, 50, & 0. The mean average rating would be 50. However, ratings of 55, 50 & 45 could also result in the same average. The second average might be more trusted because there is more consensus around a particular rating (a lower deviation).
(*In practice, some albums can have several thousand ratings)
This album has a Bayesian average rating of 68.2/100, a mean average of 67.4/100, and a trimmed mean (excluding outliers) of 67.9/100. The standard deviation for this album is 19.7.

Who the fuck thought this album title would be a good idea? Really, I don't care if it's ironic. This title and the negation are equally unacceptable; the only thing that's acceptable is its non-existence (or when it's meant ironic as comedy). Like, the statements "you should be a creep" and "you shouldn't be a creep" are both sentences I expect to come out of the mouth of a (potential) creep, someone who's not a creep simply doesn't speak of it.

I try to defend autotune and overproduced studio albums all my life; I use arguments like "you can use it artistically", or "If it's just to find that perfect take faster, then what do we care, it doesn't affect how it sounds", and then you hear something like this: an album that is clearly hurt by its overly perfectionist production. And I have to admit that there is a downside to overproduction. If a song has pretentions of being organic - like all their tracks do - then overproduction is just clown make-up on a human face, and autotune a big red nose, and a dance-rock beat pattern a big colorful wig. It's embarrassing how much generic sound effects they want to force into every track. They try ambient and shoegazing on - barf - "Please Be Naked" (I don't make this shit up) and "lostmyhead", but you can just hear it's the ultimate minimal effort they do to be able to call them these genres lest they insult their fanbase. Everything on this album is aimed to insult as few people as possible.

There is truly nothing left of the U.K. besides an inflated ego in all its citizens (wow, that was accidentally political).

Pop music, under tight control. Impressive in it's production value, but losing some of the energy and humanity of other 1975 releases.

Never on earth will I understnad the hate for this album on this website. Too long? I'd say there's not a second waisted, hardly two songs sound too similar to get bored, but not too different to get confused. Opening with a somber but short track, then jumping right into the most energetic song on the records is just awesome every time. Then the rest of the album is just golden songs after the other. My favorites all being in the same area (Love Me, UGH! and If I Beleive You) Now I can see people saying this album is nothing new or ground breaking, and yeah, you've got a point, but just listen to If I beleive you and tell me if you don't at least some what enjoy the lyricism and gospel influences.

After hearing their first album (which was ok but mostly just felt like a compilation of pop singles), I was pleasantly surprised by this record...

In many places, it uses 80s synthpop elements and re-invigorates them with the band's rougher, weirder edges to get a really addicting sound (Love Me, UGH, Paris) . In addition, there's a lot of atmosphere here -- Lostmyhead and If I Believe You are really spacious songs that grow over time to powerful climaxes.

Sometimes, the concept really disappears up its own ass (the title track and Please Be Naked, in particular) and occasionally the slick 80s pop gets a little *too* cheesy (This Must Be My Dream) but overall I was impressed with this record.

In its entirety, the record is somewhat of a surrealist blend of atmosphere and pure pop pleasure. Love them or hate them, they're really good at crafting tight and infectious pop tunes. If they'd trimmed off some of the excess, I think this thing could have been even better.

Favorite Tracks: Lostmyhead, Paris, If I Believe You, Love Me, Somebody Else

Least Favorite: I like it when you sleep for you are so beautiful yet so unaware of it

An album wearing an impeccably spruced-up leather ensemble under a deeply punchable face. Sorry that sounds harsh, but I Like It When You Get On The Bus, For You Sit Down and Eventually Get Off At Your Stop doesn't take long to make you want to put this unbelievably smug, self-aware piece of pretentious anti-pretension wankshite in it's place.

I mean, it sounds great, clearly everything was mixed to absolute spotless perfection, but dear fuhging god the stratospheric self-awareness and... um... anti-irony? of the lyrics may work fine for a single or two but for a damn HOUR AND FIFTEEN MINUTES it feels more like a relentless mental cattle-prod, where you just hope you finally tip the fuck over before the album's painfully turgid running time is over.

Best advice is to find all the instrumental versions of the tracks and make one killer ambient pop album, but dear gawd if I ever have to hear that guy again... (shivers). Clearly now there's only one life wish: never get stuck in a room alone with these guys without a guaranteed vow of silence.

Pleasant but quite derivative electro pop. Considering It's bagged album of the year status on a couple of sites disappointing.

This is the best pop album of 2016. and I love the growth between this and their previous album and i LOVE the direction they seem to be headed towards with LostMyHead, Somebody Else, The Sound..
Literally cannot understate how much this album grew on me throughout the year and how much i love it right now!! \o/ \o/

I think that this is overall, a great pop album. The singles 'The Sound', 'UGH!', 'Love Me' and 'Somebody Else', are all good but aren't the best songs on the album. When interviewed about his lyrics, Matt Healy said that the one thing he wanted to talk about on this album was on the song 'If I Believe You', in which he is questioning his faith. This song has a modern sounding gospel feel to it and is one of the best songs on the album. After this is another highlight, Please Be Naked, an instrumental. 'Ballad of Me and My Brain', 'Paris', and 'She Lays Down'are also great song. The weakest songs are probably the title track and 'Lostmyhead'.

There's a lot of really good songs here, but 1 hr 14 min is a bit too long in my opinion.

Nothing on here really grabs you like "Chocolate" or "Sex", although "If I Believe You" comes close and is a standout track. This is more consistent than their first album and worth a listen. It did run a little long though but they seem to be taking steps to making something truly special.