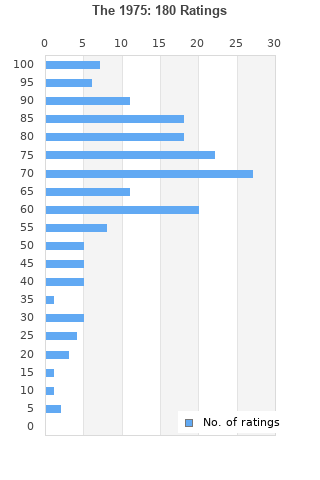 The best album by The 1975 is A Brief Inquiry Into Online Relationships which is ranked number 1236 in the list of all-time albums with a total rank score of 1,429. 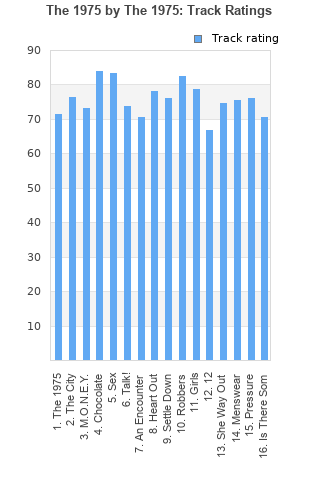 Outliers can be removed when calculating a mean average to dampen the effects of ratings outside the normal distribution. This figure is provided as the trimmed mean. A high standard deviation can be legitimate, but can sometimes indicate 'gaming' is occurring. Consider a simplified example* of an item receiving ratings of 100, 50, & 0. The mean average rating would be 50. However, ratings of 55, 50 & 45 could also result in the same average. The second average might be more trusted because there is more consensus around a particular rating (a lower deviation).
(*In practice, some albums can have several thousand ratings)
This album has a mean average rating of 65.0/100. The trimmed mean (excluding outliers) is 65.3/100. The standard deviation for this album is 20.5.

I truly adore this album. All of the tracks are good, and "Is there anyone who can watch you" is a terrific ending for the album.

Come for the banging singles, stay for some pretty decent tracks.

I love the 1975, but their more poppy debut doesn't hit me like thier newer two do, or heck even some of thier E.P's are awesome (why they left out songs like Fallingforyou and head.cars, and Milk I'll never understand) but there's still plenty of great songs here.

Overlong and somewhat tacky, but a few tracks succeed. The glossy and in-your-face production works nicely on "Robbers" and "Girls", which to me the clear highlights.

They could be a really great pop band but their lyrics are too out there!

Yeah... You gotta put a lot of Cheez Whiz on your toasts while listening to this album. The only positive thing is that the intro (The 1975) and the interludes (An Encounter, 12) are acceptable. On the other side, the singing and most of the beats are too cheesy.

Well, that is not my type of album but I'm aware that there is a good public for this genre.

A little bit too cheesy for my taste. I liked Chocolate and Girls

Great album, no awful songs, a few great ones. Most of the tracks are just decent.

These lot could stay a long time. No half measures with the artwork. Just we are here and we are are staying. Hopefully they get greater than they were on Chocolate.

Really impressive debut. They've really taken the sound of their hit 'Chocolate' and ran with it - all the songs have plunky sounding guitars and plenty of atmospheric reverb. It's a pop album at heart, and there are some great tunes, but sadly it doesn't feature as much ambient moments as found on their EPs which I thought made them really special. The vocalist is strong, but doesn't always use his eccentric way of singing as best as he could.

The last song feels like a bad effort to include a sad final moment, but some nice lyrics. The band are capable of making slower tunes, 'Me' on their EP 'Music For Cars' is perhaps their strongest effort - but moments like that have been ditched for a much bigger album, that I'm sure will help sell more copies. 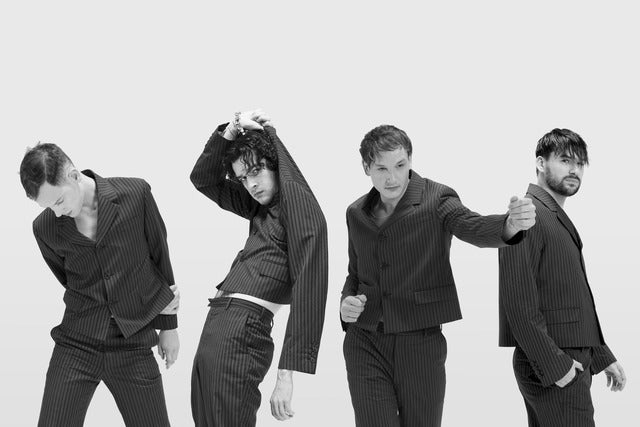