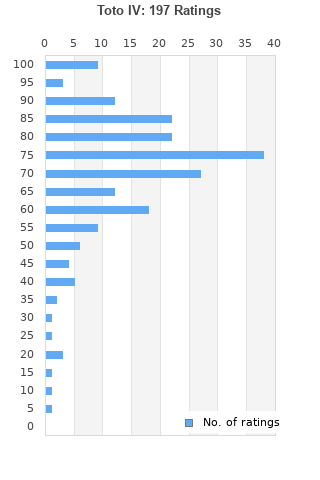 TOTO - Toto IV ( LP - Mexico CBS 5758 - Rare Press - VG+ )
Condition: Used
Time left: 8h 52m 17s
Ships to: Worldwide
$19.00
Go to store
Product prices and availability are accurate as of the date indicated and are subject to change. Any price and availability information displayed on the linked website at the time of purchase will apply to the purchase of this product.  See full search results on eBay

Toto IV is ranked as the best album by Toto. 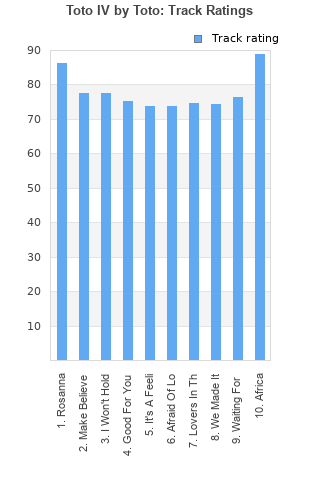 Rating metrics: Outliers can be removed when calculating a mean average to dampen the effects of ratings outside the normal distribution. This figure is provided as the trimmed mean. A high standard deviation can be legitimate, but can sometimes indicate 'gaming' is occurring. Consider a simplified example* of an item receiving ratings of 100, 50, & 0. The mean average rating would be 50. However, ratings of 55, 50 & 45 could also result in the same average. The second average might be more trusted because there is more consensus around a particular rating (a lower deviation).
(*In practice, some albums can have several thousand ratings)
This album has a Bayesian average rating of 71.4/100, a mean average of 70.6/100, and a trimmed mean (excluding outliers) of 71.3/100. The standard deviation for this album is 17.5.

Africa and Rosanna are classics. Rating (80.00)

It may be uncool to like this band but I kinda link what they do. The drumming on Rosanna is simply amazing.

Rosanna and Africa plus a bunch of completely forgettable stuff. I would not buy this album, Toto's Greatest Hits is all you need.

Things got cheesy here but it's still charming!

By any means, no other ensembles in the history of recorded music have individually or collectively had a larger imprint on pop culture than the members of Toto. As individuals, the band members can be heard on an astonishing 5000 albums, which has had a huge impact of the sound of pop and rock music throughout history (Michael Jackson's "Thriller" or Donald Fagen's "The Nightfly") are clear examples hereof.

At the same time being perhaps music history's most despised band, this is a fact that not many are aware of. Toto deserve accolades for having shapes and being defining in the sound of pop music as we know it today.

The band itself are understood the best, and only, as session musicians trying to push the boundaries for perfect musicianship, which these guys perfected better than any other band, being practically machines in terms of their precision and professionalism.

Huge honors from me to Toto!

Extremely well crafted by the best studio musicians in music history. Thanks to Porcaro, Luke, Paich and Hungate for this AOR pearl. Jeff's drums on Rosanna are iconic and makes any drummer's jaw drop!

Extremely well crafted by the best studio musicians in music history. Thanks to Porcaro, Luke, Paich and Hungate for this AOR pearl. Jeff's drums on Rosanna are iconic and makes any drummer's jaw drop!

Only Africa and Rosanna :)

Your feedback for Toto IV