The Beatles Box Set (compilation album) by The Beatles 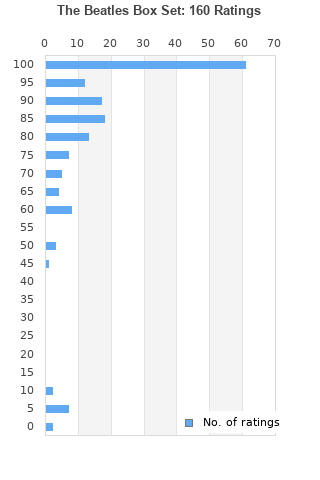 The Beatles Box Set is ranked 29th best out of 66 albums by The Beatles on BestEverAlbums.com.

The best album by The Beatles is Abbey Road which is ranked number 3 in the list of all-time albums with a total rank score of 72,705. 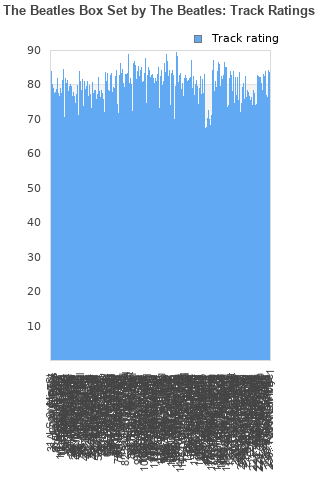 Rating metrics: Outliers can be removed when calculating a mean average to dampen the effects of ratings outside the normal distribution. This figure is provided as the trimmed mean. A high standard deviation can be legitimate, but can sometimes indicate 'gaming' is occurring. Consider a simplified example* of an item receiving ratings of 100, 50, & 0. The mean average rating would be 50. However, ratings of 55, 50 & 45 could also result in the same average. The second average might be more trusted because there is more consensus around a particular rating (a lower deviation).
(*In practice, some albums can have several thousand ratings)
This album is rated in the top 1% of all albums on BestEverAlbums.com. This album has a Bayesian average rating of 86.4/100, a mean average of 82.5/100, and a trimmed mean (excluding outliers) of 87.3/100. The standard deviation for this album is 25.1.

whoever added this must be rolling in the points

What the hell is this doing here ! I mean come on, it's not an album. I'm a big fan of The Beatles but this is ridiculous ! Someone please delete it.

Agree with the comments that this should be considered an album and ranked this high. A lot of the albums in the box sets are already on the charts individually.

As a rule, I never include best of's / greatest hits or compilations. This is a great collection of music but it's not an album so shoulod really be on a website called Best Ever Albums. Just my pet peev.

Not really an album, its a collection. It shouldn't be in the top 10.

As said, this is not an album. It's a box set which consists of several albums. I really think that this so-called album should be deleted!

This ought to be required ownership.

also, this is not an album.

Your feedback for The Beatles Box Set