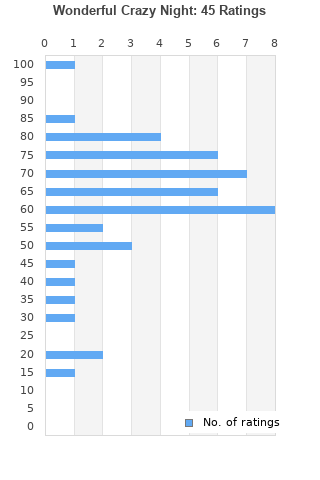 ELTON JOHN - Wonderful Crazy Night (2016) CD
Condition: Like New
Time left: 7h 48m 34s
Ships to: Worldwide
$3.99
Go to store
Product prices and availability are accurate as of the date indicated and are subject to change. Any price and availability information displayed on the linked website at the time of purchase will apply to the purchase of this product.  See full search results on eBay

Wonderful Crazy Night is ranked 19th best out of 47 albums by Elton John on BestEverAlbums.com.

The best album by Elton John is Goodbye Yellow Brick Road which is ranked number 221 in the list of all-time albums with a total rank score of 8,803. 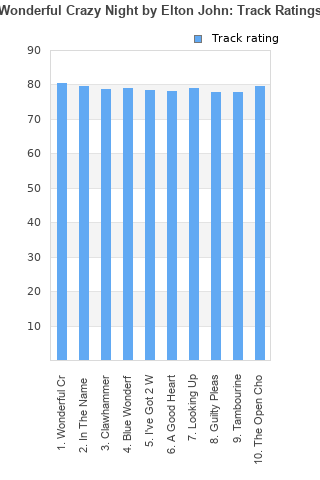 Rating metrics: Outliers can be removed when calculating a mean average to dampen the effects of ratings outside the normal distribution. This figure is provided as the trimmed mean. A high standard deviation can be legitimate, but can sometimes indicate 'gaming' is occurring. Consider a simplified example* of an item receiving ratings of 100, 50, & 0. The mean average rating would be 50. However, ratings of 55, 50 & 45 could also result in the same average. The second average might be more trusted because there is more consensus around a particular rating (a lower deviation).
(*In practice, some albums can have several thousand ratings)
This album has a Bayesian average rating of 63.4/100, a mean average of 61.2/100, and a trimmed mean (excluding outliers) of 61.2/100. The standard deviation for this album is 19.4.

I liked the first 7 tracks, but then began to lose interest later in the album. At first I was feeling pretty satisfied, but then I started thinking of Elton John's earlier work and realized nothing on this album even comes close to some of his best songs. Compare this album to David Bowie's Blackstar. Both artists have been around a long time But Bowie has adapted with the times while Elton John is becoming more generic. Had this album come out in 70's instead of "Goodbye Yellow Brick Road" Elton John would be nowhere near as famous as he is now. "Wonderful Crazy Night" isn't bad, but it isn't amazing either. It just feels unnecessary.

Definitely better than expected. Obviously will never have the same level of consistency as the early stuff but is very pleasant to listen to/great showcase of the Elton John Band's musicianship.

A mixed bag overall. Some tracks that remind me why I love some of Elton John's jazzier stuff ("Wonderful Crazy Night", "Clawhammer", "Looking Up") and some stuff that remind me why I'm not a big fan of some of his melodies ("A Good Heart", "Blue Wonderful"). But - while it can't be discussed in the same room as "Captain Fantastic", "Madman", and "GYBR", ect... - it is still a solid pop album and fun to hear EJ still rocking it.

...Yes, he is! and this is a pretty a good pop album. Songs on Wonderful Crazy Night aren't far from what he had done on his lasts releases and this good stuff!

Your feedback for Wonderful Crazy Night