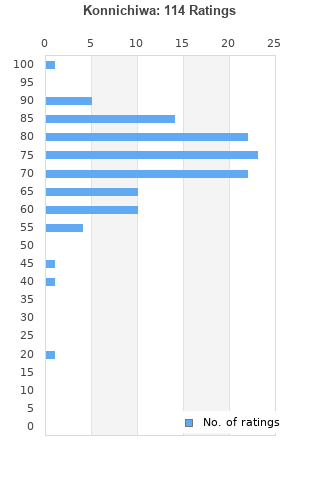 Skepta : Konnichiwa CD (2016) Value Guaranteed from eBay’s biggest seller!
Condition: Very Good
Time left: 9d 8h 40m 24s
Ships to: Worldwide
£4.19
Go to store
Product prices and availability are accurate as of the date indicated and are subject to change. Any price and availability information displayed on the linked website at the time of purchase will apply to the purchase of this product.  See full search results on eBay

Konnichiwa is ranked as the best album by Skepta. 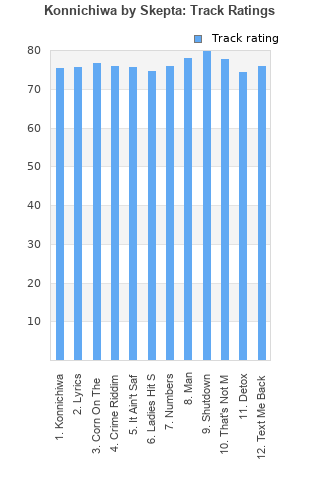 Rating metrics: Outliers can be removed when calculating a mean average to dampen the effects of ratings outside the normal distribution. This figure is provided as the trimmed mean. A high standard deviation can be legitimate, but can sometimes indicate 'gaming' is occurring. Consider a simplified example* of an item receiving ratings of 100, 50, & 0. The mean average rating would be 50. However, ratings of 55, 50 & 45 could also result in the same average. The second average might be more trusted because there is more consensus around a particular rating (a lower deviation).
(*In practice, some albums can have several thousand ratings)
This album has a Bayesian average rating of 74.2/100, a mean average of 73.8/100, and a trimmed mean (excluding outliers) of 74.3/100. The standard deviation for this album is 10.9.

A good grime record full of catchy bangers. Somewhat insubstantial, but does the trick if you're looking for fun tunes.

This album is okay

A surprisingly good grime album from Skepta. I am looking forward to whatever he does next.

Least favorite track: Text Me Back

It's no modern classic, but it is a solid album.

Better than anything coming out of the US IMO. Grime has got a more legit sound in that it doesn't dress itself up to please a mainstream audience. Skepta does, however, ensure that his art is well dressed enough to please due to great production, killer beats and catchy tunes. I love the mix of electronic, drum n base, dubstep, rapping that stands uniquely as it's own style, across the drink in the U.K., facing off with hip hop.

Your feedback for Konnichiwa