A Song For You (studio album) by Carpenters 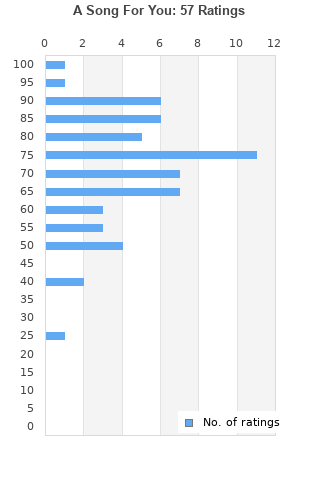 The Carpenters-Carpenters (The) - A Song For You CD NEW
Condition: Brand New
Time left: 16m 57s
Ships to: Worldwide
$21.77
Go to store

Carpenters ‎– A Song For You 1972 LP
Condition: Used
Time left: 2h 36m 55s
Ships to: Worldwide
$8.00
Go to store
Product prices and availability are accurate as of the date indicated and are subject to change. Any price and availability information displayed on the linked website at the time of purchase will apply to the purchase of this product.  See full search results on eBay

A Song For You is ranked 2nd best out of 17 albums by Carpenters on BestEverAlbums.com.

The best album by Carpenters is Close To You which is ranked number 5004 in the list of all-time albums with a total rank score of 264. 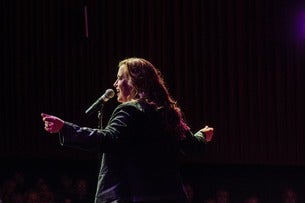 Close to You: The Music of the Carpenters
Missouri Theatre Columbia, Columbia, United States.

Top of the World - A Tribute to the Carpenters
Aventura Arts & Cultural Center, Aventura, United States. 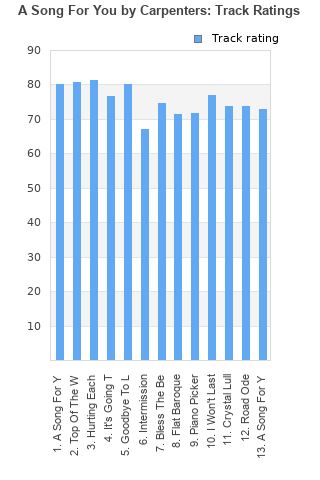 A Song For You rankings

A Song For You collection

A Song For You ratings

Rating metrics: Outliers can be removed when calculating a mean average to dampen the effects of ratings outside the normal distribution. This figure is provided as the trimmed mean. A high standard deviation can be legitimate, but can sometimes indicate 'gaming' is occurring. Consider a simplified example* of an item receiving ratings of 100, 50, & 0. The mean average rating would be 50. However, ratings of 55, 50 & 45 could also result in the same average. The second average might be more trusted because there is more consensus around a particular rating (a lower deviation).
(*In practice, some albums can have several thousand ratings)
This album has a Bayesian average rating of 73.0/100, a mean average of 71.9/100, and a trimmed mean (excluding outliers) of 72.9/100. The standard deviation for this album is 14.8.

A Song For You favourites

A Song For You comments

A great album & their best work, every track is good even the Richard Carpenter vocals on the track Piano Picker. Side 1 (tracks 1-6) is exceptional easy listening laid back music and the final 3 tracks are a brilliant way to close an album, Road Ode is a very underrated song. Karen Carpenter has a quality in her voice that melts your soul.

This is MOR-music at its best! Beautiful crafted songs and orchestration and Karen Carpenter's heavenly voice on top of it!! Amazing!!!

Your feedback for A Song For You