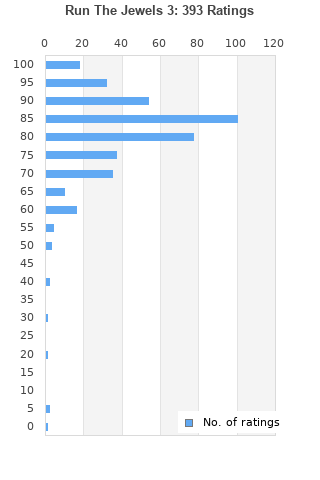 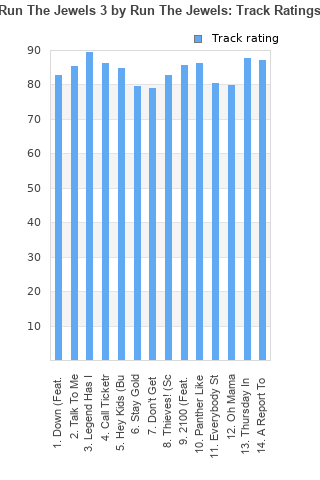 Rating metrics: Outliers can be removed when calculating a mean average to dampen the effects of ratings outside the normal distribution. This figure is provided as the trimmed mean. A high standard deviation can be legitimate, but can sometimes indicate 'gaming' is occurring. Consider a simplified example* of an item receiving ratings of 100, 50, & 0. The mean average rating would be 50. However, ratings of 55, 50 & 45 could also result in the same average. The second average might be more trusted because there is more consensus around a particular rating (a lower deviation).
(*In practice, some albums can have several thousand ratings)
This album is rated in the top 1% of all albums on BestEverAlbums.com. This album has a Bayesian average rating of 81.6/100, a mean average of 80.7/100, and a trimmed mean (excluding outliers) of 81.8/100. The standard deviation for this album is 13.1.

Infectiously catchy hooks throughout, but it also doesn’t compromise in its hard hitting production either. The songs really merge together fantastically well while not sounding similar at all which is incredibly difficult to do. A great album from a great duo.

This is my favourite RTJ album. Its a travesty that its ranked so low here, the album deserves every bit of praise that RTJ2 got. Hopefully, the success of RTJ4 will bring some attention to this record in hindsight.

Run the Jewels may be the most talented rap duo of the decade if not ever. This is their best album by far: political, raw, great hooks, awesome aggression. Fantastic.

As far as I’m concerned, they can Run The Jewels as long as they want. This third full-length release (unless you count Meow The Jewels) is the purest evidence yet that Killer Mike and El-P’s styles are the perfect complement to each other. The end result is both ferocious and fun, calling out corruption over hypnotic beats and hooks.

I don't, AT ALL, understand why this album is ranked so low. It's a must listen for hiphop fans. The flow of this album is ridiculous, you're in the next song before you know it, without them all sounding too much alike or certain songs not feeling fleshed out enough. I don't know how they did that. The chemistry between them is top notch, they hit the Beastie Boys level of comradery. The lyrics are at times funny, politically engaged and deep on a personal level, with especially Mike sharing some real introspection.
It is consistent, but it also has certain high points where you're just in awe of how good and inventive the flow of words is. Example: the way Mike says 'I refuse to play humble, like my dick ittybitty, I got banana dick, yo' bitch go apeshit if she hit it' on Panther. Aside from the wordplay with bananadick and apeshit, there's contentwise not much to these bars, but they sound so fantastic and are so much fun to say.
I keep mentioning Mike, but El shines on this as well, he's no longer really in Mike's shadow rapping-wise, and his production is soo bad ass here.
I love this album, it's not my favorite of the year or anything, because look at this fucking year, but goddamn do I love coming back to this and it never fails to fill me up with energy. It's the duo's best imo, and I don't for the life of me get why it's ranked as their lowest. I realise it came out at the very end of a full year (for hiphop in particular with ATCQ, Danny Brown, Anderson. Paak, Kendrick Lamar and Kanye West dropping stuff that was great in descending order, Kanye's being a mixed bag with moments of genius, overall not his best work to say the least) so maybe that's why people forgot to put this on their year lists. Still a scandalous oversight and I hope time will do this wonderful wonderful piece of art justice.

Honestly their best album. It would be ranked a lot higher if they didn't literally drop it the day before Christmas.

I was completely surprised this album was nowhere near the top thousand after I became a big fan of this duo with their second LP. To me, this album is more consistent and politically charged than their second effort and I love it for that. Somehow the hype doesn’t let up and the record has a killer ending, not to mention the low point of the album (“Stay Gold” & “Don’t Get Captured”) still tops “Love Again” from RTJ 2. Overall, one of my favorite albums, rap or otherwise, for the year, and definitely better in my opinion than The Life Of Pablo (though that album is engaging in its own way.)

This album is insanely good. More tracks than RTJ2 and yet more consistent and more creative. As great as RTJ2 is, they definitely were able to top it here. Excited to see what Killer Mike & El-P do next!

Highlights: Down, Talk To Me, Legend Has It, Thieves, Thursday In The Danger Room, Report To The Shareholders/Kill Your Masters

Your feedback for Run The Jewels 3