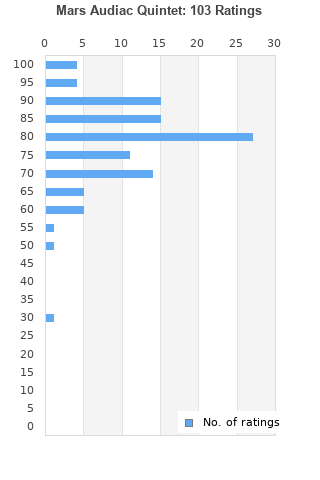 STEREOLAB Mars Audiac Quintet [1994] 2CD
Condition: Good
Time left: 23h 39m 58s
Ships to: Worldwide
£16.99
Go to store
Product prices and availability are accurate as of the date indicated and are subject to change. Any price and availability information displayed on the linked website at the time of purchase will apply to the purchase of this product.  See full search results on eBay

Mars Audiac Quintet is ranked 4th best out of 25 albums by Stereolab on BestEverAlbums.com.

The best album by Stereolab is Emperor Tomato Ketchup which is ranked number 871 in the list of all-time albums with a total rank score of 2,147. 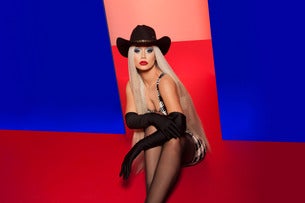 Surfaces: Good 2 Be Back Tour
The Sylvee, Madison, United States. 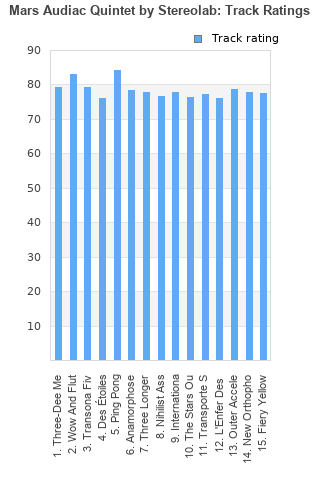 Rating metrics: Outliers can be removed when calculating a mean average to dampen the effects of ratings outside the normal distribution. This figure is provided as the trimmed mean. A high standard deviation can be legitimate, but can sometimes indicate 'gaming' is occurring. Consider a simplified example* of an item receiving ratings of 100, 50, & 0. The mean average rating would be 50. However, ratings of 55, 50 & 45 could also result in the same average. The second average might be more trusted because there is more consensus around a particular rating (a lower deviation).
(*In practice, some albums can have several thousand ratings)
This album is rated in the top 2% of all albums on BestEverAlbums.com. This album has a Bayesian average rating of 79.8/100, a mean average of 80.2/100, and a trimmed mean (excluding outliers) of 80.5/100. The standard deviation for this album is 9.9.

Frothy Anglo/French Synth pop of the highest order though the album is a little "front loaded". The extras disc in the expanded version is also excellent.

This is the album that earned the groop the affectionate nickname of "moog terrorists" among fans. This is mostly pop music, composed of multi-layered analog synthesizers (far more melodic and harmonious than on previous work), combined with Marx-influenced and anarchist lyrics, Can-like bass riffs, Neu!-ish motorik repetition, airy Beach Boys-esque bah-dee-bah backing vocals, and lounge orchestration. As if that weren't enough, the album contains cleverly rewritten (even if uncredited) reprises of previous material from such diverse origins as Canned Heat, The 5th Dimension, Steve Reich, Suicide, Lucia Pamela, with plenty more hidden winks and nods. The result is a comparative music treasure chest.

As one friend and music reviewer wrote on its August 1994 release, "Tim Gane's repetitive music and Laetitia Sadier's vocals clash in a decidedly intentional political irony." Wonderful from start to finish!

The meaning of existence can't be supplied by religion or ideology.

Your feedback for Mars Audiac Quintet