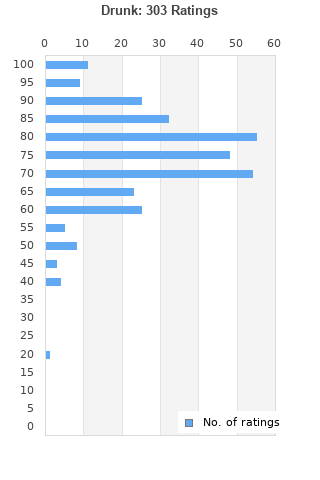 Drunk (10 inch Vinyl) by Thundercat.
Condition: Brand New
Time left: 1d 7h 34m 16s
Ships to: Worldwide
$52.70
Go to store
Product prices and availability are accurate as of the date indicated and are subject to change. Any price and availability information displayed on the linked website at the time of purchase will apply to the purchase of this product.  See full search results on eBay

Drunk is ranked as the best album by Thundercat. 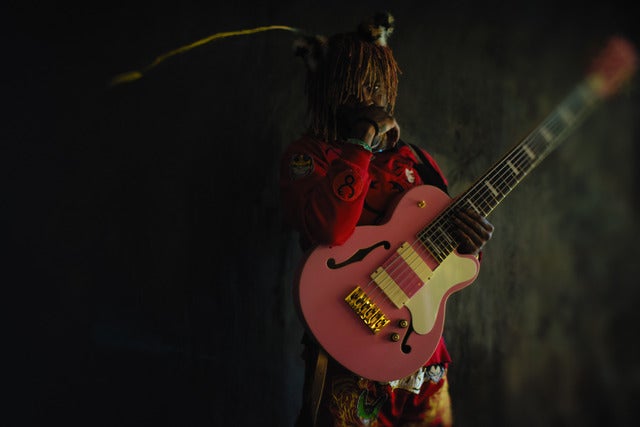 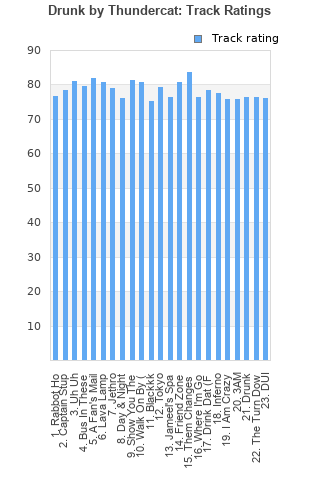 Rating metrics: Outliers can be removed when calculating a mean average to dampen the effects of ratings outside the normal distribution. This figure is provided as the trimmed mean. A high standard deviation can be legitimate, but can sometimes indicate 'gaming' is occurring. Consider a simplified example* of an item receiving ratings of 100, 50, & 0. The mean average rating would be 50. However, ratings of 55, 50 & 45 could also result in the same average. The second average might be more trusted because there is more consensus around a particular rating (a lower deviation).
(*In practice, some albums can have several thousand ratings)
This album is rated in the top 24% of albums on BestEverAlbums.com. This album has a mean average rating of 74.0/100. The trimmed mean (excluding outliers) is 74.5/100. The standard deviation for this album is 12.6.

Not since Flying Lotus’ You’re Dead! has an album tried out so many ideas so quickly without losing focus. Drunk comprises twenty-three short tracks, meaning that just as one song starts to get a bit cartoonish, you’re suddenly knocked back by the suave bassline of another. I have a very hard time picturing the sort of person that wouldn’t get anything out of this album. Perhaps because they don’t exist.

I'll have to agree with what's been said lyrically. That's the strongest point. After two listens, I can see where paladisiac is coming from. I also see how people can absolutely love it like they would a Mother's of Invention album. Some weak tracks.

It's a fairly good album, it just might be a bit on the long side.
Top Tracks: Them Changes, Tokyo

There were a lot of good sounds on this project, but there were also a lot of half-baked ideas. There were some that could've been amazing songs if they took more time to work on them. Not a bad album, not amazing either.

i was really surprised i like this so much, i kinda talked trash about thundercat after his contributions to fly lo's "you're dead" that album generally just didn't do it for me.

however i really appreciate the way he writes and can use this absurd humor but still seem heartfelt. i love the way he produced this, but there are some videos of his band playing stripped down versions on 'the current' that just blew me away. check it out.

Drunk is one of those albums that is less than the sum of its parts. If I were to go through and rate each individual song, I'd probably come away with a much higher track average than album rating. However the lack of variety on this album really hampers it. Thundercat really needs to expand his vocal range and maybe venture outside of his comfort zone on the bass a bit more. I love Golden Age quite a lot and I'm always happy to see Thudercat as a feature, however his solo work has been lackluster as of late.

Impressive piece of work from Thundercat. I personally prefer the second half over the first half of the record, but it all flows really well and there are some exciting features and surprising melodies. "Drunk" oozes with funk.

I think what took me most was the lyrics. It's almost as if he is weaving a narrative within. They generally deal with Thundercat struggling with going through the regular happenings of life. Interesting, relatible and surprising soulful.

Your feedback for Drunk