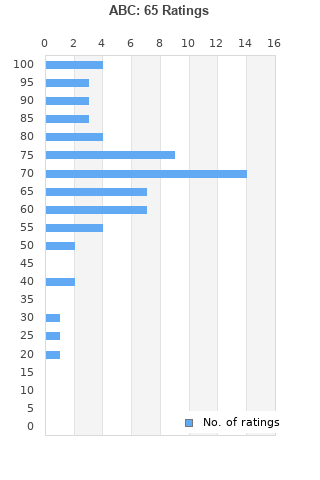 ABC is ranked as the best album by Jackson 5. 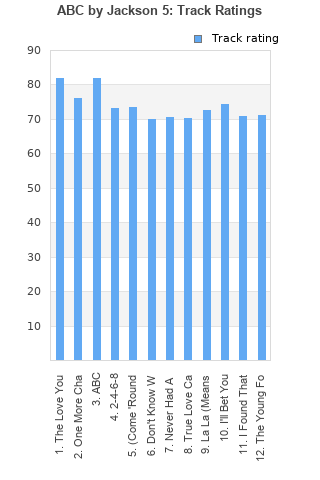 Rating metrics: Outliers can be removed when calculating a mean average to dampen the effects of ratings outside the normal distribution. This figure is provided as the trimmed mean. A high standard deviation can be legitimate, but can sometimes indicate 'gaming' is occurring. Consider a simplified example* of an item receiving ratings of 100, 50, & 0. The mean average rating would be 50. However, ratings of 55, 50 & 45 could also result in the same average. The second average might be more trusted because there is more consensus around a particular rating (a lower deviation).
(*In practice, some albums can have several thousand ratings)
This album has a Bayesian average rating of 71.3/100, a mean average of 70.2/100, and a trimmed mean (excluding outliers) of 71.0/100. The standard deviation for this album is 16.5.

The 2nd Jackson 5 album is ok but is full of fillers The Love You Save & ABC stand out from the rest other good tracks are 2-4-6-8 & I Found That Girl.

Starts out as one of the most incredible pop albums of all time, but after those first three magical tune, ABC trails off a bit until the cover of the Delfonics La La (Means I Love You). The Funkadelic cover that follows it a weird one too. The bulk of the album could be tossed away, but those first 3 tracks are too good to ignore.

A fun record, Motown pop for kids of all ages.

Is this a compilation?

Your feedback for ABC