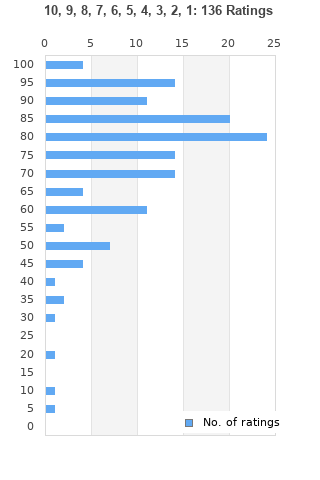 The best album by Midnight Oil is Diesel And Dust which is ranked number 968 in the list of all-time albums with a total rank score of 1,923. 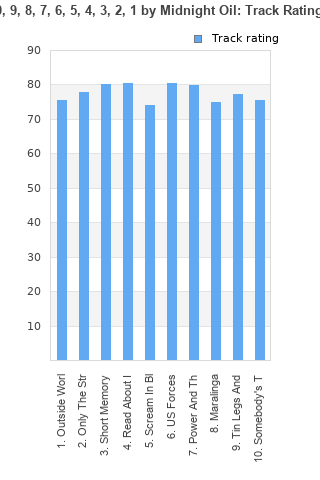 Rating metrics: Outliers can be removed when calculating a mean average to dampen the effects of ratings outside the normal distribution. This figure is provided as the trimmed mean. A high standard deviation can be legitimate, but can sometimes indicate 'gaming' is occurring. Consider a simplified example* of an item receiving ratings of 100, 50, & 0. The mean average rating would be 50. However, ratings of 55, 50 & 45 could also result in the same average. The second average might be more trusted because there is more consensus around a particular rating (a lower deviation).
(*In practice, some albums can have several thousand ratings)
This album is rated in the top 8% of all albums on BestEverAlbums.com. This album has a Bayesian average rating of 75.8/100, a mean average of 74.6/100, and a trimmed mean (excluding outliers) of 76.0/100. The standard deviation for this album is 18.0.

A true Aussie icon band at their best in Midnight Oil with 10 to 1. The album covers a whole range of political topics with some attitude and pleads for solutions in this complex world. From Destruction of Cambodia to business deals in parking lots, this has so many great lines to read about. I remember after an Oils concert everyone in the train sing their song U.S. Forces...magic. This album has great hits mixed with atmospheric sounds and tune like Pink Floyd. This album is legendary in Australia and should be the same over the world.

This album appears under appreciated on this site but in Australia it has God like status for any music lover growing up in the 80's . This album provided the soundtrack to our young lives , we smoked weed , lost our virginity and drove around the coast all with this album blowing our minds . Only beaten by Midnight Oils Diesel and Dust for best Australian album of all time . I know every word , every note every micro second of this amazingl album and god damn love it . I understand how the Australian lyrical content could be confusing to non- Australian listeners impacting scores

A rock smorgasboard where picking the best track is nigh impossible. Went platinum 10 times over locally but hardly a ripple anywhere else. Pity because this is the greatest rock band of the eighties at their pinnacle.

In '83 or '84 I came home one day with 2 albums by new groups (to Canada anyway) that I had heard about but had only heard one song from each. My roommate pronounced them both "shit". Both are still in my personal top 100 of all time. One is this, which got me into good Aussie rock. The other was Murmur-REM.

One of the great landmark Aussie albums

with this recording the "aussis" are proving, that they could write tuneful and interesting poprock songs. still there are ups and downs here. some tracks are good, but some doesn't make much sense to me.