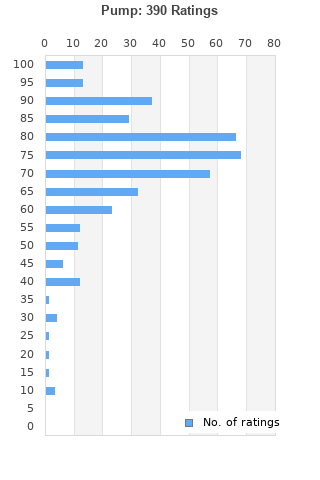 Aerosmith Pump CD UK
Condition: Good
Time left: 1h 35m
Ships to: Worldwide
£1.99
Go to store
Product prices and availability are accurate as of the date indicated and are subject to change. Any price and availability information displayed on the linked website at the time of purchase will apply to the purchase of this product.  See full search results on eBay

Pump is ranked 3rd best out of 30 albums by Aerosmith on BestEverAlbums.com.

The best album by Aerosmith is Toys In The Attic which is ranked number 713 in the list of all-time albums with a total rank score of 2,673. 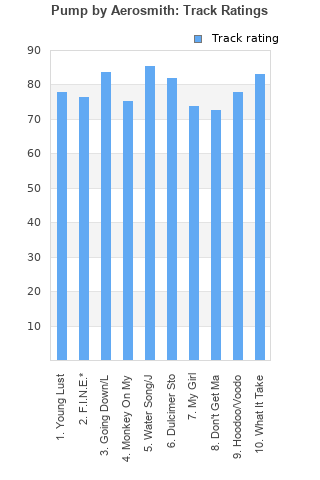 Rating metrics: Outliers can be removed when calculating a mean average to dampen the effects of ratings outside the normal distribution. This figure is provided as the trimmed mean. A high standard deviation can be legitimate, but can sometimes indicate 'gaming' is occurring. Consider a simplified example* of an item receiving ratings of 100, 50, & 0. The mean average rating would be 50. However, ratings of 55, 50 & 45 could also result in the same average. The second average might be more trusted because there is more consensus around a particular rating (a lower deviation).
(*In practice, some albums can have several thousand ratings)
This album has a Bayesian average rating of 73.4/100, a mean average of 72.6/100, and a trimmed mean (excluding outliers) of 73.4/100. The standard deviation for this album is 16.2.

I think nostalgia stops me giving it a lower score and Other Side is a genuinely great song but damn the production is so slick and the hair rock songwriting is of its time in a not great way.

Favorite Tracks:Monkey On My Back

I had this tape back when it came out. But I can't get away with it now. It's just far too polished production wise for me to enjoy. No wonder as it's the guy behind the big bon Jovi albums of the late 80s and you can tell. I'll stick to their 70s stuff. And from this period I'll take Appetite for Destruction and leave Pump with Hysteria.

Very very good hard rock album, with some gems on it. Relentless until What it takes; one of the best Aerosmith album, and a hard rock classic.

Pump, is Aerosmith's best album. It's a vibrant, confident, and energetic classic. The whole band is on the top of their game here, especially Steven Tyler who is singing better than ever. From the opening duo of, young lust/F.I.N.E., the album never lets up, it's a one after the other, in your face rockfest, its breathless. There's no weak tracks here, from the excellent, love in an elevator, the moving, Janie's got a gun, the Beatles-esque, my girl, and the beautiful ballad, what it takes. Monkey on my back, and, the other side, are also worth a mention. A superb record, a rock'n'roll classic.

There is some good stuff on here

Your feedback for Pump