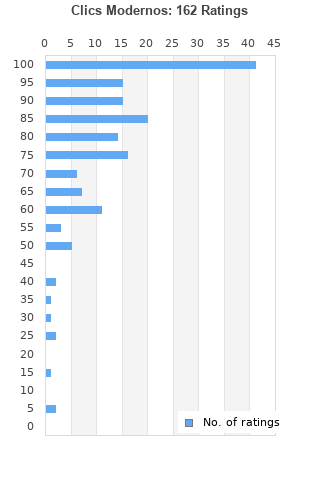 Clics Modernos is ranked as the best album by Charly García. 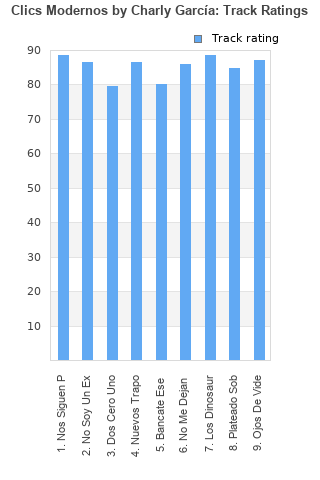 Rating metrics: Outliers can be removed when calculating a mean average to dampen the effects of ratings outside the normal distribution. This figure is provided as the trimmed mean. A high standard deviation can be legitimate, but can sometimes indicate 'gaming' is occurring. Consider a simplified example* of an item receiving ratings of 100, 50, & 0. The mean average rating would be 50. However, ratings of 55, 50 & 45 could also result in the same average. The second average might be more trusted because there is more consensus around a particular rating (a lower deviation).
(*In practice, some albums can have several thousand ratings)
This album is rated in the top 1% of all albums on BestEverAlbums.com. This album has a Bayesian average rating of 81.5/100, a mean average of 80.6/100, and a trimmed mean (excluding outliers) of 82.1/100. The standard deviation for this album is 20.6.

A mixed bag but on the whole it is great and is so enjoyable to listen to. It is short and sweet and really leaves its mark on the listener with some of these songs being stuck in my head hours later. The guitar and the vocal are the real standouts for me and make this album what it is. The guitar work is smooth and is pivotal in both building up the songs and in the choruses as well. It is also very well produced and has lots of layers of sound to explore. There are one or two tracks which are pretty average and could be possibly cut from the record. Overall, a fantastic album that demonstrates the quality of this genre of music and is so much fun to listen to.

Absolute masterpiece. Please listen to it.

Perfect album from start to finish. It was a huge step in Charly's career to enter the 80s and put aside his progressive rock / jazz fusion sound from the 70s. An iconic latin rock album from the 80s (maybe the best of all).

Charly is perhaps the most important latin rock artist ever and this one of his best albums, if not the best

A medular album, you can notice how Argentine rock and Latin Rock in general change after this album.

Your feedback for Clics Modernos