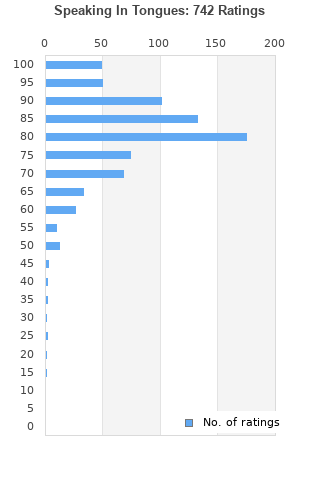 TALKING HEADS LP Speaking In Tongues 180 Gram REMASTERED Sealed REM
Condition: New
Time left: 22h 42m 2s
Ships to: Worldwide
£14.95
Go to store
Product prices and availability are accurate as of the date indicated and are subject to change. Any price and availability information displayed on the linked website at the time of purchase will apply to the purchase of this product.  See full search results on eBay

Speaking In Tongues is ranked 3rd best out of 15 albums by Talking Heads on BestEverAlbums.com.

The best album by Talking Heads is Remain In Light which is ranked number 30 in the list of all-time albums with a total rank score of 35,424. 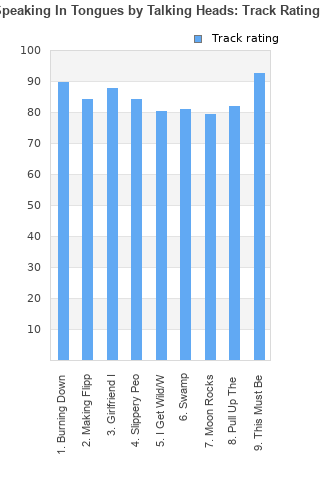 Burning Down The House
Rating: 89 (213 votes)Comments:

Rating metrics: Outliers can be removed when calculating a mean average to dampen the effects of ratings outside the normal distribution. This figure is provided as the trimmed mean. A high standard deviation can be legitimate, but can sometimes indicate 'gaming' is occurring. Consider a simplified example* of an item receiving ratings of 100, 50, & 0. The mean average rating would be 50. However, ratings of 55, 50 & 45 could also result in the same average. The second average might be more trusted because there is more consensus around a particular rating (a lower deviation).
(*In practice, some albums can have several thousand ratings)
This album is rated in the top 2% of all albums on BestEverAlbums.com. This album has a mean average rating of 80.0/100. The trimmed mean (excluding outliers) is 80.5/100. The standard deviation for this album is 12.5.

Another great, funky record by Talking Heads. You can't help to AT LEAST bob your head along to most of the tracks here. I keep coming back to this one ever once in a while and always love it.

Favorite Tracks: This Must Be the Place, Girlfriend is Better, Burning Down the House

Favourite track: "This Must Be The Place"
Least-liked track: "Swamp"

The odd ball production and quietly paranoid lyrics really give this album a charm. The second half does have some hollow lyrics but is still catchy. And of course "This must be the place" may be the best love song ever written with a beautiful ending note.

Fantastically catchy and crazy album. Each track excels beyond belief and the synth work is stunning. Shows the incredible potential of an amazing band, even without the production of Brian Eno.

Great album, but many songs on this are far better on Stop Making Sense

For me, this is Talking Heads' crowning achievement. Every single groove is wonderful. Super catchy hooks and some masterful synth work. Remain In Light is fantastic but falls short of this in terms of consistency. Whenever I put this on, it's a real shame when it ends.

While I really enjoy Remain in Light, this is by far my favourite Talking Heads album I’ve heard so far and has spurred me on to explore the parts of their discography that I have yet to delve into.

The opener is amazing, actually the first three tracks are amazing, all very listenable. The rest of the album up until the penultimate track varies from good to great, and said penultimate track ‘Pull Up the Roots’ is another amazing one and the closer ‘This Must Be the Place’ is one of my favourite songs and is one of the best album closers of the 80s.

This album is one that I loved from the first listen, and I have found myself sticking it on more often than any of the other TH/David Byrne albums that I own.

Incredibly underrated albums of theirs (second best)! This what a happy Remain in Light sounds like, although the lyrics aren't as deep or complex as the latter I loved this album almost just as much...

For some strange reason Speaking in Tongues is the only Talking Heads album I really like (I do agree that Remain in light is impressive though...) I just love the weird sounds and danceable, catchy melodies of the album. Every Halloween I feel the need the put on that record, oddly...

A really enjoyable album. Not as good as Remain In Light but still high quality new wave

Your feedback for Speaking In Tongues