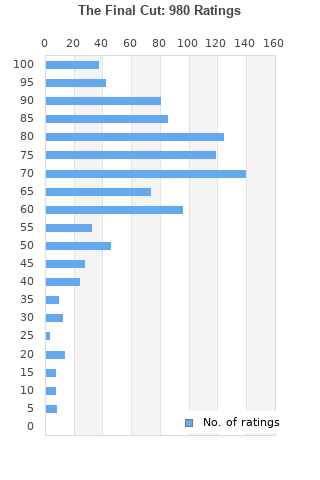 The Final Cut is ranked 10th best out of 36 albums by Pink Floyd on BestEverAlbums.com.

The best album by Pink Floyd is The Dark Side Of The Moon which is ranked number 2 in the list of all-time albums with a total rank score of 83,414. 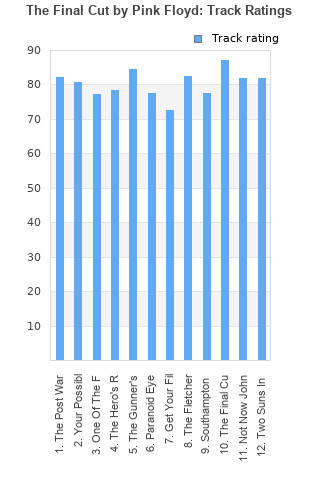 Rating metrics: Outliers can be removed when calculating a mean average to dampen the effects of ratings outside the normal distribution. This figure is provided as the trimmed mean. A high standard deviation can be legitimate, but can sometimes indicate 'gaming' is occurring. Consider a simplified example* of an item receiving ratings of 100, 50, & 0. The mean average rating would be 50. However, ratings of 55, 50 & 45 could also result in the same average. The second average might be more trusted because there is more consensus around a particular rating (a lower deviation).
(*In practice, some albums can have several thousand ratings)
This album has a Bayesian average rating of 70.9/100, a mean average of 69.9/100, and a trimmed mean (excluding outliers) of 70.9/100. The standard deviation for this album is 19.0.

better than i remember

I enjoy many of Pink Floyd’s albums but this one didn’t take. Waters went too far here and this is a bloody mess.

Paranoid Eyes and Two Suns In The Sunset are great songs, would probably make a Pink Floyd best-of compilation. I also like Your Possible Pasts, but the rest of the album I found really boring.

A great album that may fly under the radar for most people due to their more acclaimed work. This album has numerous fantastic songs that build up brilliantly and always have a fantastic pay off. Musically, it is also very varied and multi layered, like most Floyd records, and so its gives you lots to look out for and enjoy. Lyrically and vocally it is very strong as well with the passion really dominating the record. However, there are a few tracks which are close to being filler. Also, I do think it is quite similar to the Wall and does struggle to be unique. Overall, an album that is well worth a listen as it is very enjoyable and is an under rated Floyd record.

Probably the Pink Floyd album that grows on you the most. A bit repetitive and sometimes uninspired but if you give it time and establish an emotional connection with the songs (and Roger's feelings) you'll definitely see the album from a more pleasurable perspective.

Feels like a Waters solo release. Some great moments, but overall a bit dreary and empty.

Another one that’s highly underrated

I really, really like this album. Yes it does feel more Roger than Floyd. Yes Dave should have got a bit more solo time. Yes whisper and screaming goes on. The narrative links back to the Father & War backstory in The Wall. But despite all that it is still a cracking album and preferred to the post Roger Floyd - although I also really like them!

The whisper-soft vocals with distant yelling harmonies in the background or sudden burst into screaming loud vocals gets really tiring after a while, and most songs sound really similar to each other. There's not a whole lot of variety going on. Still, it's fairly enjoyable.

put ...when the tigers broke free... in alignment

Your feedback for The Final Cut