Script Of The Bridge (studio album) by The Chameleons

Script Of The Bridge by The Chameleons
Year: 1983
Overall rank: 783rd 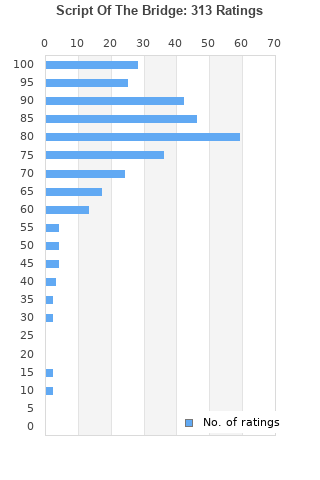 Script Of The Bridge is ranked as the best album by The Chameleons. 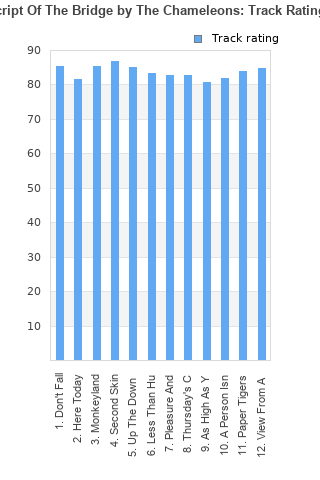 Script Of The Bridge rankings

Script Of The Bridge collection

Script Of The Bridge ratings

Rating metrics: Outliers can be removed when calculating a mean average to dampen the effects of ratings outside the normal distribution. This figure is provided as the trimmed mean. A high standard deviation can be legitimate, but can sometimes indicate 'gaming' is occurring. Consider a simplified example* of an item receiving ratings of 100, 50, & 0. The mean average rating would be 50. However, ratings of 55, 50 & 45 could also result in the same average. The second average might be more trusted because there is more consensus around a particular rating (a lower deviation).
(*In practice, some albums can have several thousand ratings)
This album is rated in the top 2% of all albums on BestEverAlbums.com. This album has a Bayesian average rating of 79.9/100, a mean average of 79.0/100, and a trimmed mean (excluding outliers) of 80.1/100. The standard deviation for this album is 16.3.

Script Of The Bridge favourites

Script Of The Bridge comments

I think this is an underrated new wave album, not a lot of versatility here, although some tracks seem to me like proto-shoegaze.
Favorite tracks: Don't Fall, Up The Down Escalator, Paper Tigers.

Oh man this album is so underrated, such a good post punk, goth album

This album really fully indulges itself in a dark and moody theme that really dominates the album. This atmosphere is created amazingly and makes the album so much fun to get wrapped up in. The band are truly one of the best and least heard of post punk artists and script of the bridge alongside Strange Times is really the peak of their artistry.

Reminds me of Disintegration by the Cure. I like it. Good, dark stuff.

Manchester had some great bands...this is one of the finest !

Very under-rated album certainly up there with the likes of Joy Division and Interpol for post-punk. No poor track on this

I listened to this album because of the comment below. I don't find many similarities between this and The Cure, but I still liked it. It's a very solid album. The first half is amazing, the real problem is the second half which is not that great, but it's still very good. Overall, a nice record.

Favorite tracks: Monkeyland, Second Skin, Up the Down Escalator

Recommended by Apple Music as I was obsessively listening to The Cure. This is one of those Love at First Listen experiences.
All the tracks are solid except for a couple tracks that sounded a little repetitive. It sounded a bit like The Cure and I'm loving the baselines and the drum.
My Favorite Tracks:
Second Skin
Less Than Human
Pleasure and Pain
View from a Hill

Your feedback for Script Of The Bridge